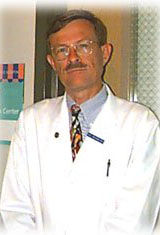 Dr. Karl Anderson, a physician at the University of Texas Medical Branch (UTMB) at Galveston, Texas, is considered one of the top porphyria experts in the world, and has served on the American Porphyria Foundation Scientific Advisory Board (SAB) since its inception in 1982.

Dr. Anderson is a Professor in the Departments of Preventive Medicine and Community Health, and Internal Medicine (Division of Gastroenterology and Hepatology) at UTMB and directs the Porphyria Center, which includes and a comprehensive diagnostic laboratory for the Porphyrias. He and his colleagues evaluate and treat patients with all types of Porphyria, and enroll those who qualify in ongoing clinical studies.

Dr. Anderson attended the College of Wooster in Ohio and Johns Hopkins University School of Medicine, completed medical residencies at Vanderbilt University and New York Hospital-Cornell Medical Center, and a fellowship in gastroenterology at Cornell. He spent two years in the Navy doing research on hepatitis B and other tropical diseases in Taiwan, Indonesia and the Philippines. He then served on the faculties at Cornell, Rockefeller University and New York Medical College before coming to UTMB in 1987.

Dr. Anderson's research interests focus on the human Porphyrias. He has also studied effects of diet on drug metabolism and the health effects of soy in humans. Treatment studies in acute Porphyrias, Erythropoietic Protoporphyria and Porphyria Cutanea Tarda are underway. Dr. Anderson has helped the APF greatly in preparing accurate and useful information on the Porphyrias for its members.