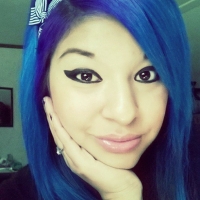 I started getting symptoms in 2010 after my 19th birthday. Every few months, I would get the “flu,” but it was worse than the flu, because it would knock me out to the point that I couldn’t get out of bed without help. My muscles and bones would not cooperate. This went on for about 2 years. It would always start with a bellyache and what seemed like heartburn. I always felt lethargic, and my bones would hurt. I needed someone to physically force me out of bed. Only hot baths would help, but it would end up being too hot and would worsen my stomach pain. I went to a few urgent care clinics but nothing popped up.

Around the middle of 2011, I began going to both of the two ERs in my town. They would do a full work-up, including blood work, CT scans, EKG, etc. Upon finding nothing, I would then head to the other ER. At one point I was told I had an ovarian cyst and removal would cure my symptoms. I agreed with everything they said. After removal, I was in even more pain than before. Hydrocodone would make me sick when they would give it to me for pain, so I began to refuse it.

In mid-2011, I started to get sick more often. I began experiencing symptoms more and more frequently. I would constantly go from one ER to the other, and they would all tell me nothing was wrong. This continued for about 6 months. Beginning in 2012, it got worse and worse. Finally, the doctors were convinced it was in my head and said I couldn’t keep coming back and forth to the ER if nothing was wrong. They said they needed to perform a psychological evaluation or send me to another place because I was becoming an issue at the hospital by taking away from other patient’s time. My mom fought back and said, “What 20 year old WANTS to be sick this badly?”

My condition deteriorated and by mid-2012, I was having monthly attacks. In September 2012, my grandmother passed away and that was the final straw. We were very close, as she was the one that raised me. About a week before she passed, I was in a walker, at my own request. I had been having spinal taps, more blood work, and many other tests, so I was not able to spend much time with my grandmother in her last days. Many specialists visited me from all over town, but nothing popped up. Many suggested “dehydration” as the cause of my symptoms.

I had a nervous breakdown when my grandmother passed away. I went to the ER in early October 2012, a few weeks after the burial. I had lost so much hope but told my mom I thought we should try the ER “one more time.” While we were there, one of the doctors decided that gallstones were causing my symptoms. They operated immediately and removed my gallbladder. I was released on October 10, 2012. The next day, after leaving the hospital, everything became too overwhelming for me to handle. I went back on October 12, 2012 and called my surgeon to see if my symptoms were possibly the result of surgical complications. He told me to just take more pain medication and that they would not admit me. The last thing I remember is walking into the ER; the staff was well familiar with me at this point. I was admitted for dehydration, malnutrition, etc. While I was in my room I asked my husband to help me to the restroom, I remember my heartbeat in my head, the walls turning black around me and me telling my husband I was going to pass out. I had 3 seizures over a few hours and I had no memory of any of the next three days after that. Supposedly, I drifted in and out, but I remembered nothing. When I woke up, I couldn’t speak to my mom. It felt like my tongue was stuck and I couldn’t move anything. I began choking on my spit, because I had become paralyzed. Later I realized I was having neurological symptoms as a result of not being treated for porphyria. When they all realized I was not faking it anymore they began calling other doctors for a consultation. They called the Texas Tech unit and by that time, I was paralyzed from the mouth down.

Starting on October 12th, I spent 62 consecutive days in hospital without leaving. Dr. Urban came in from Texas Tech. He pulled up a chair and asked my mom if I was having my cycle and when she said no, he concluded that dehydration was not my problem. He said he had a friend that was a blood specialist in NY. He sent my blood to another specialist. A few days later he told me he knew what I had. I was ecstatic. We wanted something manageable, fixable, curable, etc. He sat us down and said, “You have Acute Intermittent Porphyria” and explained it all. He said it’s not curable, however, there are treatments. He said he was not a specialist, but had witnessed this before. I remained paralyzed for a while, but slowly regained functions such as swallowing, which returned first, and then eventually all speaking abilities.

I am still in a wheelchair because of this experience. I have attacks monthly, sometimes even twice a month. I attend physical therapy, and I would be walking if I didn’t have regular attacks that practically erase any progress I have made over the last month. If I had a break from the attacks, I would be able to walk again. I mainly just experience drop foot at this point.

I always get Panhematin for attacks in my Lubbock, TX hospital. Weekly infusions would help tremendously with attacks, but since I cannot afford the treatment, the doctors apologetically told me I will have to wait until I’m in an attack to get my hemin. I have had roughly 85 hospital admissions in my lifetime. I have lost count of the exact number. For over a year and a half, I spent up to 30 consecutive hours going between ERs before I received my diagnosis.

I flew to see Dr. Anderson for the first time in August 2014. I flew to UTMB to get Panhematin and establish a relationship with a porphyria specialist. While I was there, he asked me to be part of a research trial and Dr. Ede explained what the benefits there are to joining the research. I am now enrolled in every possible study that I qualify for and have no regrets about joining the studies.