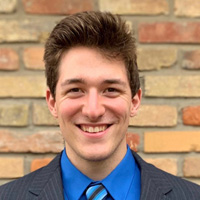 Hi, my name is Andrew McManamon. In 2018, at age 20, I was diagnosed with Acute Intermittent Porphyria (AIP)

In August 2018, I was on vacation up north with my family, a vacation that we’ve taken every year since I was a young child. We would grill the highest quality meats, ride dirt bikes and four wheelers until we were covered from head to toe in mud and have the most relaxing bonfires that consisted of singing our most favorite tunes at the top of our lungs. It was paradise, a time to be away from the world for a week with no electricity, no water, just family and nature.

The relaxation began to fade as I would soon feel the worst abdominal pain I have ever felt in my life, partnered with constipation and the constant urge to vomit. Never experiencing any pain to that magnitude, I couldn’t help but think I may have eaten something my stomach didn’t agree with. I realized all the foods we ate weren’t outside my normal everyday eating habits. After a full day of abdominal pain, constipation, the urge to vomit, sleeplessness, and extreme discomfort, I was admitted into a local hospital up north. Immediately, I was put on saline fluids and morphine to fight off the pain. When the doctor came in my room, the only reasonable diagnosis was food poisoning or catching a bacterial infection from the lake we would occasionally swim in. That day I was released and told my symptoms would eventually clear up. They didn’t. I was back in the same hospital a day or so later where I’d be given laxative medications to help kickstart my digestive system. There wasn’t the slightest bit of luck. After being released again, it was our last day of vacation where we would pack up and go home. The morning after coming back from my vacation, I made an appointment with my general physician to have blood and urine tests done along with an x-ray of my bowel. My doctor said it would take a few days for the results. Barely returning home, the doctor called and said I needed to be admitted to the ER immediately because it appeared, I had a bowel obstruction.

I arrived at the hospital, where I would then be hooked up to saline fluids and receive morphine for my pain. The surgeon came into my room and informed me that I have an ileus or bowel obstruction. It was decided that I needed Nasogastric intubation (NG tube) which is a long tube they put down your nose into your stomach to pull everything out to restart my digestive system. After 4 days I was discharged, but my fatigue was unbearable along with losing over 25 pounds. My body was frail. After a slow recovery, it wouldn’t be until November 2019 when I’d have my second attack.

This time, I knew what I had. After a full year of research, appointments with hematologists, gastrointestinal specialists, surgeons and countless blood and urine tests, this unimaginable abdomen pain and fatigue was an AIP attack. I felt alone, knowing more than most nurses, doctors, and dieticians that would step foot in my room. I told the doctors I needed Panhematin to resolve this attack not an NG tube. After hours of searching suppliers and other hospitals, they were able to get me what I needed. Four doses in four days. Little did I know Heme wasn’t supposed to be administered through a typical IV. Due to the thickness, it caused Deep Vein Thrombosis in my upper extremity (DVT-UE), a deep vein blood clot that causes excruciating pain, swelling, redness, and fever. Having to stay three extra days in the hospital to get an arm ultrasound and be monitored while I was on blood clot medication, I was eventually discharged.

As much as I would like to pretend AIP isn’t apart of my life, I can’t because there are numerous triggers for an attack from diet and nutrition to exercise and sleep. It doesn’t matter if you have one attack a year or 2-3 a month, it’s important to take care of yourself and understand what you should and shouldn’t do. Join the American Porphyria Foundation, ask questions, and never stop learning. AIP is a life event, so the more you know the better.