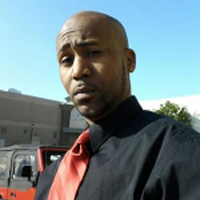 “My name is Carlos Johnson. To start, I'm not looking for any sympathy for telling my story, but this is the first time I've ever told anyone about my story except for my family.  They know everything.

So here we go, now all my life I have had really bad belly pain, and I started having seizures at the age of 2.  For a long time, I dealt with these ailments all my life and at the age of 16 or 17, I had a bad attack of some kind to the point where they thought it was my appendix, so it was removed. Still the stomach pain continued and the seizures were coming more frequent.  By that time, I was hospitalized because I had a bad seizure and it put me in a coma for a couple of days.  By this time, I had already been diagnosed with this disease called AIP by Dr Vincent Lo Rae in Philadelphia, PA.  I was in this coma for a few days, and I awoke to a tube in my neck, because I wasn't eating, and they had to keep fluids and nutrients going into my body.

It was the most horrible moment in my young life.  At that time from that moment on life got worse.  I was 17 going on 18, and I had already been a father of 1 daughter & was getting ready to be a daddy for the second time when I ended up having another attack.  I was hospitalized for 2 months which again was a horrible experience because the Dr's didn't know how to treat this very rare disease.  I was drugged up and was treated horrific in the hospital by the nursing staff because I was in so much pain and didn't feel like they were treating my pain fairly. So finally, the attack subsided.   I began to eat a very little bit, and I started being able to stand and walk again.  I had been in bed for such a long time my legs were wobbly. So I was in the hospital for 2 months and a week, then I was released & went home.  So by this time the doctors, my mother and my daughter’s mother began to realize that I would never be able to hold a steady job again due to the disease.

This was hard for me, because I had been working since the age of 14, and it was my lifelong ambition to be a chef like my father.  But that dream was crushed. They decided I had to be put on disability, so I could take care of myself and my children.  This made me so angry, because I felt like I was a failure, so I started feeling really depressed.  Then something new started.   I was throwing up and losing weight at a real fast pace.  My mom being the intelligent woman she is, began to research all of the ailments of this disease, and it started showing her all of the things that I was going through, so we had a list of things to watch out for now to figure out when an attack was coming and all the things I would go through during these attacks.

So to make a horribly long story short, I have been in and out of the hospital all my life. I tried working through all of these pains.   I've worked in hospitals cooking.   I've worked in some of the finest restaurants still while suffering from the disease.  Then finally in 2008 I was hospitalized because I had an attack on my job and had a bad seizure.  This was the worst attack I had to date.  This time I was only hospitalized for a month, but this attack was bad because it did something to my back and legs.  Still I tried to go back to work but when I got out, my body had had enough.   I was 31 and had 5 children and couldn't provide for them.  This caused a big tension between my children's mother because she began to not be able to deal with me being sick all the time.  So then I was fresh out of the hospital when this happened, I was 400 miles away from my family, I was homeless and sleeping in my car and was still very ill from just being released from the hospital. So friends of mine I was working with, took me in and took care of me until I was able to somewhat fend for myself.  So now I'm living with people I don't even know really, but they were kind.  This time it was late 2010, and I was able to make it home to Philadelphia.   I stayed home for about 6 months.  While I was there I had another attack and was hospitalized.  By this time, it was July of 2011, and I was in a hospital in Philly.  There it was a doc that knew about my porphyria (thank God), and he decided to give me the Panhematin.  I swear by the second day of having the infusion, I began to feel a whole lot better, better than I had felt in years.  With my pain meds, my seizure meds and vitamins,  I was feeling good so good,  I got a part time job and was able to provide for my family to supplement what child support was taking from my ssd check.  Then 11 months to the day I received the injection, I began to feel the symptoms of the disease coming back.   The stomach pains, the pain in my back and in my legs had all returned again.  I was hospitalized again.  Then here in Virginia, these doctors don't know or care to understand the disease because of me wanting the pain to subside again.  I have to walk with a cane permanently because my legs are unpredictable and give out on me and the pinching pain and the pain in my back and neck are horrible.  Most of the time, I'm in bed because of the pain. So this is my story thus far.  Thanks for letting me share.  Please pray for me and my family,  because it's so hard on me and my fiancé of 3 almost 4yrs  and our little boy who is 2.  It's very hard to watch my love work herself silly to take care of the 3 of us. I just wish that these drs were more educated about this disease, so that the Panhematin can be administered as needed. Thanks so much for this it really helps to talk about this.”