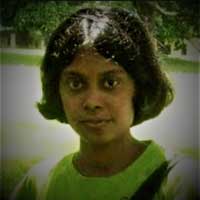 After many years now, I am aware of my disease, and I realized that I must live with the condition. Since I was six years old, I have had severe leg pain, especially in the calf area. Some nights I cried.  Some days I sat near the road because I could not walk back home from school due to leg pain. Doctors advised me to take vitamin B. They said leg pain at such a young age can be due to vitamin B deficiency. When I was eleven years old, I had severe abdominal pain and vomiting. The Doctor prescribed medications diagnosing an infection. After taking those medicines, I fell while walking. Within 24 hours, I was completely paralyzed and could not swallow fluid or food. I was also barely conscious. I was treated in the Intensive Care Unit of the hospital where I received a diagnosis of Guillain Barre Syndrome following an infection.

After that, another two recurrent similar episodes happened after taking medicines for abdominal pain and vomiting. During these attacks, the same pediatric physician cared for me.  My legs were paralyzed, so I had to use a wheelchair to move and could not go to school for months.  As I was still not diagnosed, a lot of investigations were carried out, including EEG, EMG, scan, testing cerebral spinal fluid, blood tests, and urine tests. Some of the investigations were painful and scared me. Finally, I was diagnosed with acute intermittent porphyria (AIP), which is a rare, inherited disease. Since AIP was precipitated by unsafe drugs were given, I was given an unsafe drug list.  Gradually, I recovered. Recently, I had an attack, However, due to lack of AIP awareness among medical professionals, I was treated for Gastritis instead of AIP.

On and off, I experience severe abdominal pain, vomiting, frequent constipation and sometimes back and leg pain. There are times I have leg muscle cramps, too, that are so severe that I want to be alone and relax.  It is also upsetting that AIP treatment is not easily available and people are treated with other medicines.

I always look for the positive aspects of life. Despite my condition, now I continue my higher education in Master's in Rehabilitation studies. I decided to select a carrier in physical rehabilitation of patients with physical disabilities, because as a kid, I also had difficulties in walking, which had a negative impact on my childhood education. Therefore, I am determined to support people and children with physical disabilities to make their lives better through my carrier. Now I am a Prosthetist and orthotist and work for a Rheumatology and Rehabilitation hospital, which is the national center for physical rehabilitation of disabilities in my country.