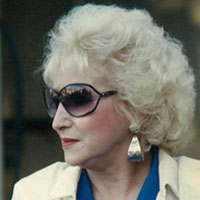 Geneva had been a healthy woman, until she had her second child.  At that point, life changed for her,  and it changed for the worse.   She became very ill and suffered bouts of terrible pain.  None of her doctors could determine what was the cause of her illness despite repeated tests.  Eventually,  her doctors no longer believed that her symptoms and pain had a physical source.    Instead she was told repeatedly that her illness was "in her head."    This medical response has happened to many people who have one of the acute porphyrias.

Unfortunately, over time, Geneva became sicker and experienced major excruciating attacks.    Still no medical professional could diagnose her despite the intensity of her illness.  Rather, they took action on their diagnosis that her symptoms were mental and not physical and sent her to a psychiatrist for help.

Although Geneva was willing to visit the psychiatrist, she maintained all the while that her pain was real and not emotional.   However, as her abdominal  pain grew worse , her doctor held even firmer to their idea that her symptoms were "in her head."

Without a diagnosis and treatment, Geneva continued to be sick.  Clearly, the source of her pain and sickness was not EMOTIONAL.  She finally went into a serious coma.  Geneva says, she was divinely blessed because, a doctor, who was not one of her regular physicians, happened to hear about Geneva's symptoms.  Ten years prior to seeing Geneva, he had been with another patient who had the same symptoms as Geneva , including the extreme pain.

Because of his suspicion that Geneva had one of the acute porphyrias, the doctor asked that she be tested for porphyria.  When the tests were returned, they were positive for one of the acute porphyrias, Acute Intermittent Porphyria.    No  one was more thrilled to have a correct diagnosis than Geneva. Her doctors now knew she was actually a very sick woman and they knew to withdraw medications that were causing her life threatening attack.

Geneva recalled when she awake from her coma, the hospital staff had filled her room with sweet rolls, candies, cakes, every kind of delicious carbohydrate imaginable.   It was, perhaps, their way of apologizing for her years of misdiagnosis. and embarrassment.    At last, Geneva had received a diagnosis and in the process, found a doctor who was willing to manage her care.