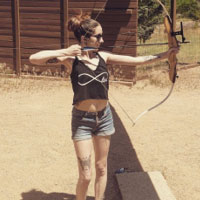 In 2015, I was 21 years old and made the decision to move from Vermont to Colorado by myself. A couple of days before I was scheduled to leave, I began experiencing intense pain in my abdomen and back. I chalked it up to the stress of moving, but I can vividly remember taking a bath up until the minute guests arrived at my going away party, and then not being able to get up off the couch during it. I made the move anyway and the moment I reached town I went straight to the hospital, where I was kept waiting in the waiting room for 7 hours only to be brought back for some blood tests, given pain medicine and to be told that I had a UTI. Happy I was at least feeling some relief, I didn’t question the doctors (although now I realize I should have)! A few weeks later my pain had fully disappeared, and I was ready to begin my new life adventure!

I got a job, met some friends and was feeling just fine. That was, until one random day when I woke up with that same pain again. However, this time the pain gradually worsened until I finally went to the hospital again. Once again, they loaded me up with pain medicine, ran some blood tests and sent me home with no answers. This went on for about two months until it got to the point that I weighed about 75lbs, I couldn’t eat, couldn’t work, or go grocery shopping. I couldn’t even stand in the shower; I would soak in the tub for hours at a time in hopes of getting some sort of relief. The pain medicine just made it worse or would make me nauseous and I would throw it up, the hospital was combining prescriptions of every and all type of pain medicine without a second thought. I quickly decided I would not take it outside the hospital, even if that meant dealing with the most excruciating, intense pain that most people couldn’t even imagine. The day that my life changed I remember trying to get in the shower, even though I felt too weak, and slipped and fell, the next thing I remember is EMT members standing over me, I was in so much pain I began to hallucinate and thought they were trying to kill me. My mom decided it was time to take me back to Vermont and get some answers. The doctors in Colorado did hundreds of tests with no answer, when a doctor in Vermont saw this, he decided he wanted to run just one more, a test for Acute Intermittent Porphyria. The doctor had never seen a case of it, but he wrote a paper on AIP in college and believed I had the symptoms of AIP and a few days later, low and behold, I had a positive test result for AIP.

After 2 months of being hospitalized, I was discharged and was given the okay to move back to Colorado. Although, that was just the beginning of my journey. I started having more attacks and was hospitalized monthly, thankfully I had my now-fiancée by my side through it all. After an attack that ended up with me in a coma, I started getting Panhematin twice a week and was no longer having attacks. Not being hospitalized was great, but I wasn’t working, couldn’t travel or feel like I could have fun, it felt like my 20’s was going to waste, and it was hard to stay positive through the darkest times.

Now, I am on my fifth Gilvaari shot and I’ve felt better than I ever! I finally have my life back, I have a job and I’m planning a wedding, I really am living my best life with AIP. It’s not an easy fight whatsoever, I’d never wish AIP on the worst person, but it can be done. WE ARE WARRIORS.