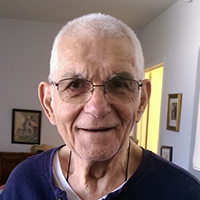 I was about 30 when I had my first porphyria attack.  It all started with severe abdominal pain, like the pain described by porphyria patients in the first 2016 APF newsletter. The pain was almost unbearable. They put me in the hospital and didn’t know what was wrong. They began giving me medication but I was going downhill quickly. I called my mother to come to Birmingham, Alabama, where I was living, and she came down with porphyria symptoms around the same time. I was so confused and disoriented that I told my mother, much later, “I dreamed that I was in a strait-jacket.” But she told me that was no dream! Apparently I had gone into another patient’s room to use their shower, so they restrained me. My mother went into a coma while I was ill. I came to Jacksonville to be near other family after this. I had another 1-2 years of ineffective treatment and had a terrible backache. They gave me several over-the-counter drugs, but I was finally referred to a doctor that specialized in hand surgeries. He gave me a simple exercise and my back began to feel better quickly. This doctor recommended I begin swimming for exercise and this improved my situation tremendously. Swimming helped for about 10 years, from age 52-62, until I moved to another location that didn’t have a pool I liked nearly as much.

I got married and shortly after, my attacks started again and I began having trouble digesting my food. A doctor gave me a new medication to alleviate this and it made me worse overall. The problem was actually solved with the transcendental meditation I started at age 33. I have been practicing since I was 33, and I am now 77. I also started yoga.

While my most severe pain occurred during my first attack, I continued to have porphyria pain and I wasn’t diagnosed for several years after my first attack. My first attack was around the time when my mother went into a porphyria related coma. Later when they diagnosed my mother with Acute Intermittent Porphyria (AIP), they also tested me and I tested positive. I have tested positive on every 24-hour urine test I’ve had in my whole life. My doctor prescribed a polycose powder for me to take in an attempt to keep my porphyria attacks at bay. I ingest local honey each day, along with peanut butter, and eat small meals every 4 hours, coupled with a traditional meal once/day.

Ever since my diagnosis, I have been a dedicated member of the APF.