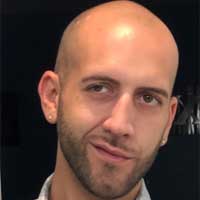 Hi, my name is John Haffner-Henriques from New York, USA. I was just diagnosed with an AHP, Acute Intermittent Porphyria, in March 2021. I have to say, after over at least ten years of symptoms and the last 4-5 years of monthly/weekly attacks, finding out that there is a name for everything I have lived through is such a game-changer!

I have been misdiagnosed with many different things, from GI issues to psych issues, etc. Every ER visit ended with no answers and just attributed it to my other confirmed diagnoses, Crohns/colitis, psoriasis, and psoriatic arthritis that had been managed by infusions. I have developed gut motility, and bacterial issues, and several other symptoms that we now know are due to the attacks.

At one point, I created a binder for my personal health. I started printing everything out and keeping it all together, scans, tests, labs, dr notes, etc., made a diet journal, etc., trying to make sure all my doctors were looking at everything and hopefully not missing anything. At the end of 2018, during one of my follow-up visits, I found out that I had thyroid cancer that had spread to my lymph nodes in my neck. I had a total thyroidectomy, and the lymph nodes removed, followed by radioactive iodine treatment in 2019, but I am still following up on that as I haven’t fully been cleared yet.

About two years ago, I started getting labeled as drug-seeking. The most frustrating part was all I asked for was some type of muscle relaxer to stop my stomach from cramping and wrenching, nausea meds, and iv fluids!!! As a former EMT and current medical field employee, being ignored and treated repeatedly as if I’m a drug addict having withdrawals brought me down to a low point where I became depressed, withdrawn, and started having negative thoughts about my life.

I stopped going to the hospital ER’s because I would sit for hours on end waiting for some medication or iv fluids to be started while I’m put in a corner bed, out of the way, crying, shaking, sweating profusely, and dry-heaving/vomiting bile and mucus. I stopped going to the GI physician I saw at the time since he had nothing new to tell me and wasn’t trying to check anything else.

I dealt with monthly attacks that often turned to weekly for the last 4-5 years. After eight different GI physicians and years of tests, scans, bloodwork, I finally had an NP who had seen AHP once before during her nursing training and said, “What the heck, let’s test for it while you’re having this attack” and it came back positive after they re-processed for confirmation.

My quality of life had decreased significantly as the years went on and symptoms/attacks continued. I missed out on many things in life, birthdays, holidays, events, had issues with work due to attendance, etc. COVID didn’t help with the withdrawal and depression. Working from home and not going anywhere as an immuno-compromised person.

I used to be such a fun, outgoing and adventurous person. The symptoms and attacks made every day a potential attack day which made me anxious and constantly feared the next attack. They’re physically and psychologically debilitating. Sometimes I would spend days going between my bed and the bathroom, not able to eat, barely able to keep water down, in pain, out of breath, and just hoping I would pass out from exhaustion. I could barely make out complete sentences, unable to even look at my phone, let alone try to make a phone call.

This last attack lasted about five days long and took almost three weeks to recover from. My worst attack ever! Since the attack lasted so long, I was able to do the 24 hr urine test. I wasn’t able to get solid foods down for almost a month. I lost about 25lbs during that time because I could only get down baby food, broth soups, and ensure drinks, and not much with constant nausea. I spent the entire day and most of the night with a heating pad on my stomach to help ease the cramping pains. When the results came back positive, my NP and I started reading and learning.

It’s crazy how many of my issues, big-small, are explained by this disease. I’ve learned that several medications I had been on for over ten years were triggers, and I had gotten to the point that I knew alcohol was a trigger of whatever I had going on since within an hour of a few drinks, I was starting to have attack symptoms.

March 19th, 2021, I had my first treatment of GIVLAARI, and I am looking forward to the future and am becoming hopeful again! Although I have to make more lifestyle, diet, and medication changes, I am so excited to FINALLY know the monster I’m dealing with and, hopefully, to have better days ahead with treatment and trigger prevention!