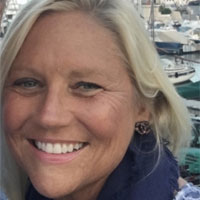 I was diagnosed in May 1996 while 6 months pregnant with my second child. I thank God that because I was pregnant, I had an OB/GYN doctor who refused to give up testing until they found the cause of my pain. I was kept in the hospital for a week while they did test after test after test. They discovered fairly early that whatever my problem was, it was not affecting the baby, and was not directly related to my pregnancy. Because I was pregnant, they couldn’t give me any of the drugs that are harmful to the baby, and because of that likely saved my life by not giving me anything that could exacerbate porphyria. I had a 24-hour urine collection, as well as blood sent to the Mayo Clinic. I remember the doctor coming into my room and telling me, “we know what is wrong with you, but we don’t know much about it. You have a rare genetic disorder called Acute Intermittent Porphyria. We did 3 hours on it in medical school. So, I will try to research and get information.” After a week of IV glucose, fluids and pain management I felt well enough to be discharged and continued on with my pregnancy. I delivered a healthy baby and life continued.

About a year later I was again felled with pain. I went to the ER and was lucky they had the AIP diagnosis in my records. This continued on and off for years which turned into decades. In the meantime, because of my lack of understanding of the pain and the myriad of other symptoms these attacks could cause, along with the doctors’ lack of knowledge of AIP, I have had test after test. I had 2 D&Cs, a hysterectomy, and my gallbladder removed. I have been hospitalized more times than I can count, I have been given drugs counter indicated that cause attacks. My husband, parents, children, sister have all seen me brought down by these attacks.

While briefly living in England, I had a hospital send me home without any treatment, not even hydration or glucose (but given a sandwich and tea??), the waiting list to be seen by a porphyria specialist was longer than the time we remained in the country.

I’ve been hospitalized for cluster headaches and put on high blood pressure meds by a hospital physician (super dangerous because I have low blood pressure) because he refused to call my primary care physician. I have been in and out of consciousness, in agonizing pain. My family has been with me when doctors did not know if I’d live through the night. I’ve spent months of my life in hospitals, I’ve missed events, I have spent many times alone in bed, I am no longer the same person I was before porphyria damage took over my life, I have become a shadow of my former self.

I don’t drink alcohol at all anymore. No more for me the fun umbrella drink, no mai tais, margaritas, or champagne. I *try* to avoid stress, I am learning that I can no longer do all the things I’d like. I live life in constant pain, I have permanent neuropathic damage, and I still get terrible attacks requiring trips to the hospital.

I have had Panhematin® on numerous occasions. My hope is that I will be approved for Givlaari (Givosiran).

This genetic disorder runs in my dad’s side of the family. My aunt was never diagnosed, but died in her early 60’s. At her funeral my dad, cousins and I talked about how her symptoms through the years absolutely mimicked mine. Many of my cousins on my dad’s side of the family all suffer from various forms of “stomach” issues. Debilitating pain, etc. etc. You can pass on Porphyria without having symptoms. Each child has a 50/50 chance of inheriting this genetic disorder, my prayer is of course that my children do not inherit. If they do, I pray they remain asymptotic. They are adults now, so the choice to be tested or not lies with them.

**Update: on July 7, 2020 I was approved for Givlaari and I cannot wait to begin, I hope it gives me back at least part of my life!!