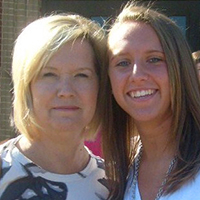 Growing up, I've always had the fear of losing my mom. She's the strongest person I know and what makes her so strong is the will power and strength God gave her. My mom has a rare disease called Acute Intermittent Porphyria. There's no cure, but there is a medicine called Panhematin that my mom receives every week through a port. This medicine controls her attacks, which she has every 21 days. There has been two times where I thought she was gone and the day would come that I dread the most.

When I was in kindergarten, my mom quit her job. I remember her telling me she was sick and wasn't able to work anymore. Since I was five years old, I didn't quite understand, and as time progressed the sickness never left. I knew then that the sickness would never leave. I remember coming home and my mom not being there. I was attached to my mom, like any other young child and her not being there felt like something was always missing and a part of me was lost. No one would explain to me what was really going on because of my age. I remember seeing her in the hospital and thinking that wasn't my mom. But it was, just a different view of her-a view a child never wants to see of their mom. I only went to the hospital twice because my family wanted to keep me focused and not startle me.

My grandmother, my mom's mom, was like a second mother to me. It was hard being around her at times because she reminded me exactly of my own mom. Looking at my grandmother, during that time, was hard because her face was discolored, worried, and full of pain. I stayed with my grandmother during the whole time that my mom was in the hospital, because our family was at loose ends with what the disease was putting us through.

As time progressed, my mom returned home. I'm not sure how long she stayed at the hospital but it was for over three months and as a child I told people it felt like forever. When she came home, she stayed for quite some time before going back into that negative stage.

In my sophomore year, I was going through drama with friends and I wasn't on top of my game in soccer. By this time I fully understood my mom's disease even though I had to bug people, I still received answers. During February, my mom was thrown into an attack that left her in ICU. When going to see my mom in ICU, she didn't know who I was, she couldn't talk, and her skin made her appear as if she was already dead. The condition she was in was unbearable for me and thinking about the pain she went through made my pain increase. School was supposed to be my escape but it made things worse. My body felt like shutting down but it never did. I couldn't close my eyes at night because I was afraid I would see her die in my dreams. I felt like there was no purpose in life. If my mom passed, I would make sure I was right behind her.

After seeing her one night at her worst, I broke down right there in the hospital. My legs became weak, my stomach cringed tight, my arms felt like they were falling off, my head felt like it was going to burst into tiny pieces due to the pressure, and my heart was nowhere to be found. It had vanished from my flesh. With my head down, I walked out of the hospital, straight outside into the cold night air, until a hard rock body slammed into my body with arms embraced around me like they were locked. I didn't look to see who it was because a hug was all I needed. After a while, I realized it was my dear friend, who I like to call my "lifeguider." Any time I have a problem she's just a phone call away and she knows exactly what to say. We talked for an hour outside the hospital, and she said, "I was on my way home and I was just about to call you and as I passed by the hospital, something made me stop to check on you. I didn't know exactly where your mom was located in the hospital, but somehow I knew I would find you."

The next two months felt like two years. My dad was under a great deal of stress ten times more than I was. I'd never seen him like that and I knew this wasn't him. I was used to the pain by now. I wouldn't cry anymore because I didn't think my body could. I never ate because I was never hungry anymore. Like I said, my body shut down-things I did before were no more. Every day, I repeated the same process of waiting for time to pass and seeing what the future had in store for me.

Finally, after those two months, my mom returned home. It felt like the day of redemption and a weight had been lifted off my whole body. In a week, she had returned to her normal self again. It was as if God was her and she couldn't be hurt anymore.