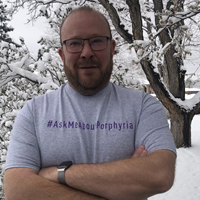 In late 2002, after a yearlong battle, I was diagnosed with Acute Intermittent Porphyria (AIP).  At first, I was relieved to finally have answers. Then, I learned how little there was that could be done with the disorder.  I wasn't the first in my family to be diagnosed.  In the late 1950's my great uncle was diagnosed and then died of the disorder.  My grandmother would follow in the early 60's at the young age of 28.  My mother was also diagnosed in the mid 1990's.  Needless to say I thought I understood the seriousness of the situation, but after learning what my treatment options were, I became nervous.  After all, I'm married and have two children. How was my ability to support them going to be affected?  I did some research on the disorder and stumbled across the American Porphyria Foundation.  Through conversing with them I learned of some opportunities to help find better treatments and, maybe, a cure.  I jumped at the chance with more concern about my children having the gene than with concern about myself.

The first study I enrolled in was simple and straight forward.  It required no travel and only one time did I have to send them any samples.  It was simply blood which was drawn at my local doctor’s office and then mailed off to Salt Lake City.  The Longitudinal Study is a simple study and I strongly encourage everyone to take part in this study.  It was through this study that I was able to get gene testing done at no cost to me.  Now, I have concrete proof of my diagnosis.  I am still in the study and once in a great while fill out more papers with questions about how I am doing.  Like I said-- simple and straight forward.

The second study I took part in was the Panhematin study.  This study required me to fly to Galveston, Texas and stay there in the hospital for four days.  The research grant paid for all of my travel expenses and there was of course no in hospital expenses for me to worry about.  The APF arranged all the travel. Again, this study had a simple procedure.  Once I began feeling as though I had an attack coming on I contacted the foundation and they made the travel arrangements.  The next day I flew into Houston Hobby Airport where a car service picked me up and drove me to University of Texas Medical Branch in Galveston.  This particular study was a double blind study.  That means that neither I, nor the doctors and nurses know if I was getting the Panhematin or a placebo.  Only the pharmacist knew.  In order to keep the secrecy I had to wear a blindfold, the tubing and medicine was wrapped in foil, and a sheet was also placed between me and the bottle of whatever I was getting.  This happened once a day for four days, and I was also on normal saline with 10% dextrose constantly while I was there.  In all my experience with this study was good.  Things went smoothly and before I knew it, I was on my way back home to Colorado.