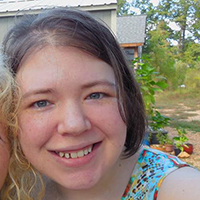 My name is Penelope Burris I’m 31 yrs. old, from Missouri and I have been ill with AIP for ten years. Despite years of illness, we didn’t know I had AIP until my testing at St. Francis in Cape Girardeau, MO and my diagnosis at Barnes Jewish in St. Louis.   I had a minor laparoscopy in 2002 followed by an acute attack which put me in the ICU.  The doctors were stumped because the medications weren't making me better. When my mom researched my symptoms, she found porphyria and asked my doctor if it could be a possibility. He took me off all medication and ran the 24 hour urine and sent it to Mayo.  Then I was transferred to Barnes Jewish where I was diagnosed me with AIP and was given my first two PANHEMATIN treatments, which SAVED MY LIFE. I feel it saved my life.

I still have acute attacks, so when it was time for my third Panhematin, Dr. Nagy ordered a port at our local hospital. I was full of emotions. I was excited to have the treatments, nervous and a little scared. The date arrived and my mom and I went to the hospital for me to be admitted. I have to say that having my doctor set everything up in advance for me made everything go much smoother for me and the hospital. After I was admitted and in my room the nurses drew my blood and began prepping me for the procedure, all I had to do was lie there. They were ready for me soon and I was transferred to the surgical room for the port line to be inserted in my arm, no turning back now so I kept calm and wasn't afraid amazingly. Once I was in the room, the team was already there and they were prepared for me, calm and friendly. In no time at all they were asking me if I was ready to begin. I said yes and a nurse came over to my hospital bed and put the IV in so they could administer the numbing drug. The IV was the most painful part of the procedure for me. I've had many IV's but this one really hurt, but very quickly the pain went away. Once my vein was numb, the surgeon was ready to begin to insert my port line. He made the small incision in my arm and began the procedure using a sonogram machine to guide the line. I felt no pain at all but I did feel the port line going in. He checked on me and asked me if I wanted to watch the machine, but I declined- I was just wanted it over quickly. My mom was able to be right there with me and it was a comfort. Before I knew it, it was over and I was ready to receive my Panhematin treatment. Back in my room, I received my treatment over a three day period.  Although I could move my arm, I decided against moving it around at all during the treatments to minimize damage. I felt better almost immediately after my treatment began. Despite some phlebitis, inflammation and weakness in my arm, it was worth it because the Panhematin treatments have helped to control my AIP.