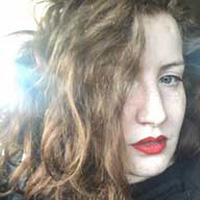 Hi, my name is Rebekah. In 2016, at age 24, I was diagnosed with Acute Intermittent Porphyria (AIP).

On November 24th, 2015, I took my initial trip to the Emergency Room. I had severe abdominal pain and nonstop vomiting but was told to just “go home” and essentially sleep it off. Within a week, I started having my first seizures and was admitted to the hospital with no clue to what was wrong. It took 46 days for them to have ANY idea what it might be. During this time, I experienced extreme prolonged hallucinations.  I also lost the use of all my muscles. By January 1st, I needed to be put on life support. I couldn’t even blink.

I was very lucky when a doctor guessed porphyria based on a recent publication, he had read a month prior. I had five distant third cousins, who were all siblings, diagnosed with porphyria and that was enough to request genetic tests.

Panhematin finally got the attack to subside, but so much damage had been done. I never was able to regain full use of my hands or legs again. The nerve damage took months to repair what it could. During that time, I had two more attacks, but we were able to handle them in less than a week.

It took 14-months for me to finally be able to go home. 11 months in, I was told by a rehab center that I would never walk again and would probably be living in a nursing home the rest of my life.

Thankfully with a dedicated rehab team, I was able to make it to the point where I’m NOT in a nursing home but living alone in my own apartment.

I’m living my life how I want now, not letting in toxic people. Porphyria, and getting sick in general, really showed me who my friends are and that it’s not worth sweating small stuff when it could be so much worse.

I would give anything for use of my legs back, but I’m happy to not be laying in a hospital bed anymore.