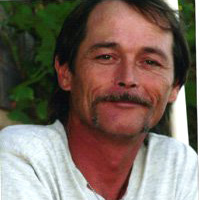 Richard Dugger remembers having abdominal pain since childhood. But the pain worsened until he said, "It was like Richard Duggera red hot spear poking all the way through my body from front to back. I also felt like I was crawling out of my own skin and was fuzzy in the head. Sometimes I couldn't see clearly either. My sister had all the same symptoms but we never thought that we had the same disease or that it could be genetic." Years of pain and sickness went by for Richard without a diagnosis. After too many trips to the doctors to count, Richard began to get discouraged, particularly when members of his own family began to doubt his illness. But his wife held steadfast. She had seen him at his worse; screaming in pain. Richard had so many sick days at work, he could no longer keep a job. He opened up his own contracting business and worked as much as possible, but it was very difficult for him.

His appendix and gall bladder were removed in an attempt to halt the terrible abdominal pain. But neither surgery made a difference in the frequency or intensity of the pain. Even after pointing out that his urine looked like dark, bock beer, he was told that he was dehydrated and should try to take in more fluids. He accepted the doctor's explanation but wondered how he could possibly be dehydrated when he drank copious amounts of water every day. As a contractor in the dry heat of Arizona, keeping hydrated was an essential part of his job. When the pain became unbearable again, he proceeded to try once again to discover the source of his pain.

Not until he had to visit a rheumatologist for a different ailment, did he discover what had been wrong with him for over four decades. When Richard mentioned the intense abdominal pain, the rheumatologist said he had diagnosed one other person with acute porphyria who had similar pain. He decided to test Richard for Acute Intermittent Porphyria (AIP). When the tests came back positive, he retested him to make sure the tests were correct. The second test was positive as well. since receiving treatment, Richard has finally been able to live a more normal life.

He not only felt relieved to finally have a diagnosis, he also felt vindicated. His former doubters apologized. But Richard told them, "I even doubted myself at times."