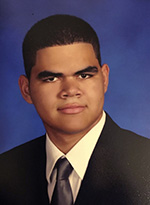 My name is Milton Eduardo Cubas and I am 29 years old. Sports and I physical activities with others are two of my favorite things. My current studies at Miami Dade College are to become a math teacher. I had my first porphyria attack in a very hot summer day of 2000 at a castle in Cartagena, Colombia named Castillo San Felipe de Barajas. I was with family members and I remember feeling fatigued while taking a tour of the castle. I drank a whole bottle of water after leaving. Once I got in a taxi I felt nausea. I felt tired. We stopped to eat something but I would vomit water until nothing would come out. I had gone to hospitals in Colombia and they couldn’t find anything. I remember feeling a lot of pain while looking for anyone to tell me what is going on. I had to cut my trip to Colombia short because we couldn’t find anyone to help me and my pain was getting worse. I went to Miami Children’s Hospital and my attack got better and the doctors still couldn’t find anything. I would have an attack every month or two for a year until a doctor named Elsa Vasconsuelos told me that I may have Porphyria. Soon after that, my dad found Dr. Anderson. I would take two or three trips to Galveston, Texas until he diagnosed me in February 2003 with aminolevulinic acid dehydratase-deficient porphyria, which is abbreviated as ADP. Through my teenage years, I had attacks nearly every month. Once I hit my 20’s the attacks spread out more. The longest I’ve spent without an attack is two and a half years but after that I had 3 attacks really close to each other that affected my neuropathy a lot. My last attack was mid-July of 2017. I get hematin every single Friday. I have tried spacing out the hematin to every 10 days or every 14 days but I would get an attack after that. During the attack, I would have to be hospitalized to get hematin for four days every day. I get heme in an infusion center. Some of my negative experiences are that some nurses don’t know how to administer the hematin the correct way when I’m hospitalized. The neuropathy has affected me every day from dressing myself to doing homework. I have trouble with extending my fingers that stops me from doing hand gestures. I have foot drop where I could lose my balance easily. It has forced me to try find anywhere where there is AC. I could last longer in the sun now but in the summer I can’t. There have been positive experiences, too. I have met a lot of wonderful people, nurses and doctors, who have helped me when I’m trying to get better. My Family has supported me and helped me whenever I couldn’t drive or when I was hospitalized. I want to become a Math teacher and I am studying really hard to graduate. I want to get my hands better. For the people who have Porphyria: Knowledge is Power. The more you know about Porphyria the stronger you will be. It is also important to participate in research and I am in the longitudinal study at UTMB.