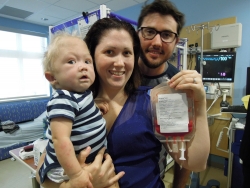 Since the day he was born, our baby Oliver has been through more than most of us have in our entire lives. Without warning, I was told that Oliver needed to be born early due to complications with little to no amniotic fluid.  Neither we nor the doctors had any idea what was ahead of us.  At 35 weeks, on November 14, 2012, Oliver Douglas Stanek was born.  He was at a healthy weight of 5 lbs 5 oz. for his age.  At first glance, we thought nothing was wrong.  He looked like a healthy little boy!  Who knew that within 24 hours things would take such a dramatic turn.

Oliver was born with renal and liver failure. His bilirubin levels were off the charts.  It seemed like the doctors had given up hope.  There is nothing worse than the thought of losing your child.  It is something that no one dares to think about yet we were living in it.  Thursday to Sunday had to be the longest 4 days of my life.  When Sunday came around, it was as if a miracle was happening. Oliver started showing signs of progression.  Our little baby was healing himself. Words cannot explain the joy we felt that day. The doctors were baffled, still trying to figure out what was wrong with him or why this even happened.  We had a few potential diagnoses but nothing that really made sense.  Finally, after two and a half months spent in the NICU, he was finally well enough to go home and be treated as an out-patient.  Knowing our little baby was finally going to come home with us was so exciting!

Oliver has been such a joy to be around. His demeanor is so calm and happy that you wouldn't even know he was sick.  Since then, Oliver has been suffering from frequent blood transfusions and multiple skin lesions.

After eight months of scratching our heads, the mystery began to unfold.   Oliver was diagnosed with Congenital Erythropoietic Porphyria (CEP); an extremely rare metabolic disorder affecting the production of heme.  At first it was hard to believe because this disease is so rare that there are only 250 reported cases. CEP causes porphyrins to build up in the bone marrow and skin, causing shortening of life of red blood cells and extreme photosensitivity to sunlight and artificial light.  In some cases, it is known to affect the liver and kidneys, as well.  Now we understood why Oliver was severely burned on the whole left side of his body from the phototherapy he was given to decrease his bilirubin.  He also suffered from multiple bone fractures due to vitamin D deficiency.

On October 17th 2013, Oliver underwent bone marrow transplantation to cure his disease. He passed through chemo with flying colors!  Unfortunately, it is now 4 months post-transplant, and he is still very red cell transfusion dependent. The doctors fear that Oliver may be rejecting his graft, or the graft is not working. Because of the many transfusions Oliver has needed in the past months, his liver has been greatly impacted.  In order to receive a second transplant, he will have to have chelation therapy that could last a couple of months. We are in high hopes that this second transplant is as easy as the first one. Please join us in praying for a better overall outcome for Oliver.

You can watch Oliver's Medical Journey following this link: http://www.youtube.com/watch?v=KEBpLp9Jz8c