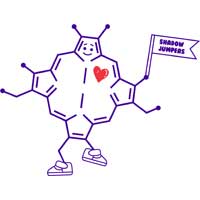 I don’t recall exactly when I started noticing I was having reactions to the sun, but somehow even when I was little, I just somehow knew I was “allergic to the sun”. Growing up was obviously very tough, constant pain but not fully knowing why. I remember many days coming back from school and rushing into the basement with a fan on me or a cool cloth to help soothe the pain. When I was younger, my parents had no idea what was wrong with me, everyone just kind of assumed because I was so pale that I just burned easily, and nothing was wrong.

After repeated reactions I was left feeling helpless. Around the time I was 13 or so, my family and I had gone to a NASCAR race in Michigan. (I live in Canada). After being out in the sun all day, my face was on fire, even with stronger sunscreen (not knowing I had EPP at this time still) it just burned. On the car ride home, about an hour or so drive, I was sitting in the back with the AC blowing on my face to help cool myself down and ease the pain. When we got back to my relatives, my mum said, “What the **** happened to your face”. When I looked at myself in the mirror, my face was about 4 times the size. I thought it was cool at the time, however, my parents did not. That was my first and only severe reaction.

I was taken to the hospital where I was given some shots and medication that I cannot recall. After about 4 hours when the swelling had started to noticeably go down, I was released. Then began months of hell, between the constant pain, then scabbing and eventually scaring. When we got back to Canada, I was referred to a dermatologist. We brought pictures of my reaction and told him everything that had happened, he said I was photosensitive and to use a special sunscreen, conveniently it cost about $100 at the time for a small bottle. I don’t remember the brand name of it, but it was next to useless. After this, my parents did start to believe something was wrong. We still didn’t know exactly what was wrong with me and to no fault of their own, my parents didn’t fully understand or believe me when I told them the amount of pain, I was in all the time. From this point until I was 18 years old it was a constant battle with the sun. I was just always hurting, rarely getting a chance to fully heal, which takes about 3 days’ time for myself. I eventually just started going in the sun, covered up as best as I could, this wasn’t a very smart idea because that just led to more reactions. When I was 18, I had found out that the dermatologist I had seen when I was younger, wasn’t a licensed dermatologist. I made a new appointment with a new dermatologist almost immediately. When I saw the new dermatologist and explained to him what I’ve been going through, along with the pictures he immediately had a good idea as to what it was.

This is when I first heard about EPP.

The doctor explained it to me, then said he would have to run tests which consisted of me having to carry around a jug to urinate in for a week, collecting stool samples and a lot of blood work. Once all the tests were completed, I was then sent to a hospital for a light exposure test. They had me stand up in what I can only describe as a standup tanning bed. They cut 6 holes into the back of my shirt, and I had to cover my head and hands with a thick towel as they blasted me with light. After all this I was finally, officially diagnosed with EPP. After seeing some other doctors and a geneticist, all I knew about EPP was how it works and I was told that I have 50/50 chance of passing it on to my kids (not sure how accurate that is, but that is what I was told by the geneticist) and there I was, back to feeling hopeless and helpless. My parents however did apologize for not believing me fully. This began a darker time in my life. I was constantly miserable, swearing at every god there was for being born this way, being so upset at times, and still having to deal with bad reactions made a perfect storm for depression. At times, the pain both physically and mentally was so overwhelming that I had thought about suicide, multiple times... From others that I have talked to, it seems to be relatively common that EPP and depression go hand in hand. Luckily, I was able to pull myself out of the slump and try to do something about it.

I tried beta carotene pills, which for those of you that know, they make your skin turn orange. These did not work for me. I had then heard about a drug called Lumitine, which was not available in Canada. I applied to have the drug shipped over through something called the special access program in Canada, to no one's surprise (myself doctors etc.) I was denied. There I was, back where I started. Nothing to help, the only advice I was given that worked was to just not go in the sun. This is obviously very tricky, between family get-togethers and other events, there were always times I “had” to go in the sun. Only until recently have I been voicing my concerns, putting my foot down and saying no to certain situations I know I will have a reaction in. This in turn led me to miss certain events or social functions, BBQ’s, family get togethers, work functions etc. No matter how hard I tried covering myself up or using expensive sunscreens with zinc I always seemed to get a reaction somewhere, somehow. It’s just easier to not deal with it and avoid the light.

Currently though, I am married to a kind caring woman and have 2 great dogs. It pains my Wife to see me in pain all the time and not being able to help, however, she does understand. She understands that if I say I cannot do something or go somewhere, she will not push it further. She is an advocate for me as well, especially with her side of the family who has no idea what EPP is. It does suck to miss events but at least some people understand why. I still make stupid mistakes and have bad reactions, either by not properly covering up or being outside for way longer than I should. But as people know more now than ever due to COVID. It is not good for your mind and body to be trapped indoors all day. I always get a good laugh when people complain about not being able to go to the beach or other outdoor activities because of COVID. I guess the silver lining of having erythropoietic protoporphyria is that it never really bothered me that we have to stay indoors.

The future for EPPers is looking very “bright” (ha-ha) with the medical advancements being made and drug trials on the go for new methods of letting us get some sort of normalcy to our lives. It is long overdue and even though I still wish I never had this crappy disorder at least now I/we have something to look forward to other than the next spot of shade. Hopefully my story has been of some help to someone, sorry for any grammatical errors or run-on sentences, I am many things, but a writer is not one of them.