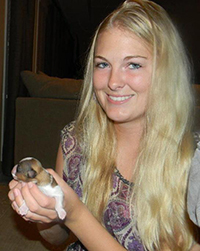 My name is Alicia Moczynski and I’m 22 years old.  I had my first porphyria episode at age 2.  However, as a child, my episodes were infrequent and mild.  It wasn’t until I turned about 16 that I started getting frequent episodes that got worse and worse over time.  No one in my family has porphyria, and the doctors could never diagnose me.  I just accepted the fact that I would never find out what is wrong with me.

Then when I turned 21 (May 2012), I had the worst episode ever.  Not only were my face, hands, arms, and legs swollen, my stomach was also in a lot of pain, and I had jaundice.  I went to the emergency room and received a misdiagnosis of Hepatitis A.  The doctor said, Hepatitis A heals on its own, and I should just give it time.  However, I never truly recovered and was bed ridden for about 3 months.

Unfortunately, during December 2012, I got very sick again with the same symptoms…severe stomach pain and jaundice.  I was admitted to the University of Alabama Hospital, where I met porphyria expert, Dr. Joseph   Bloomer.  As some may know, Dr. Bloomer is very involved with patients who have porphyria and the research.  Dr. Bloomer diagnosed me with XLP porphyria.  Finally, after 21 years, I can put a name to my misery.  I had a liver biopsy, and it showed that I already had some scarring in my liver.  Dr. Bloomer told me I had two options: I could either wait and see what happens and possibly one day have a liver transplant (very likely in my case), or I could have a bone marrow transplant instead and be “cured.”

It took me a couple of months to make my decision, but I finally decided to have a bone marrow transplant.  So on October 15,  2013 I received my transplant from an unrelated donor from Denmark (I have two sisters and they were unfortunately not a match).  I will not lie; a bone marrow transplant is hard.  I had to go through chemo, I was very weak, and I needed a caregiver 24/7.  Now almost 4 months have passed. I have gained a lot of my strength back, and I feel really good.  My road to recovery is still not over, but the thought of never having an episode again is really amazing.  I’m also very blessed to have such a great donor who was willing to help me, even though she has no idea who I am.