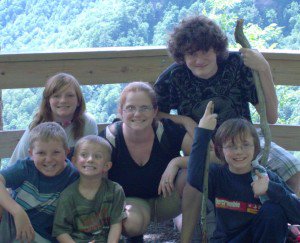 My name is Angela Houck, and I was diagnosed with EPP as a child. I started having pain when I was five, but wasn't diagnosed until about ten years of age after many hospital trips and lots of testing. I would cry and scream when I was a child after spending excess amounts of time in the sun. The doctors I saw all told my mom it was in my head and there was nothing wrong with me and that it was psychological and not physical.

Most vacations were difficult, because we always ended up in the ER with me crying. My hands, feet and face would swell. I would try pouring cold liquids on my hands and feet to make the burning stop. I tried using sunscreen and beta-carotene, but they never helped. After I turned ten, doctors at the Hershey Medical Center finally figured out what was wrong with me.

I am now a mother of five and thankfully none of my children have my symptoms, however I do worry that they will pass EPP on to their children. As I became older, I learned how much sun I can tolerate and spend lots of time in the shade. It is still very difficult for me to tolerate the sun, and unfortunately, I can't spend as much time in the sun with my children as I would like. My mother always reminded me when I was a child that I was one of the lucky ones, because at least I could go outside for a little. My parents did a wonderful job of working in vacations that I was able to enjoy. I couldn't go to amusement parks or beaches, but we found things to do.

One time, we attempted to go to Washington, D.C. to the zoo and that didn't turn out so well for me. I was 13 and I remember running from shady tree to tree, but that wasn't enough. It was one of the worst times I remember. My hands felt like they were in boiling water and I just couldn't cool them off. Throughout three-hour drive home, I kept running out of cold things to put on my hands and I cried for the entire trip. At one point all I had was a Coke and I dumped it on my hands and feet to try to relieve the burning.

I once was told by my physician that the best way to describe what is happening to me when I have an attack was that my skin was boiling, because I don't have the cells to protect me from the sun. That about sums it up, it feels like my blood is boiling under my skin and nothing but time will ease the pain.

Those are just a few of my experiences, and I know that there are people that are a lot worse off than I am, so I definitely feel for them. Most doctors today still do not know what I am talking about when I tell them about my EPP, and people just have never even heard of it. I usually just tell people I am allergic to the sun. Thank you for listening.