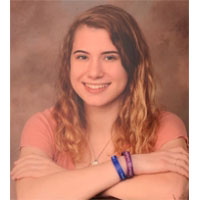 My name is Cassidy Clark and I have Erythropoietic Protoporphyria (EPP).

I am an 18-year-old high school senior.  I like to think I’m pretty funny, but I’m mostly sarcastic - very sarcastic. I was diagnosed with EPP at age 15, but I have had symptoms since I was 6 years old.

Growing up, being outdoors was a huge part of my life. Me, my younger brother, who does not have EPP, and his best friend loved to play outside – nonstop. Our favorite thing to do was to play front yard whiffle ball as well as swimming in our pool. We would stay outdoors as long as we could.

One random day when I was 6 years old, I came in and I started crying. My parents didn't know what was wrong. I would tell them over and over I was burning but just on the top of my baby toes. They didn't believe me, nor did they see anything wrong. They thought I was being a “kid” and complaining for no reason. However, the same burning sensation came back the next year and they knew then I wasn’t lying about it. They knew something was wrong. We tried everything. We tried to put ice on it, put my toes in a cold bath, put a cold rag on it, but nothing would work. When I turned 10, it began to spread. It was still burning on my toes but also on my index finger and thumb. We didn’t know what was wrong. When I was 12, it spread to the tops of my toes, my index finger, thumb, and then on the bridge of my nose to my cheekbones. I was in so much pain.

Throughout all my experiences, my parents would bring me to the hospital– handing me over to the physician asking, “What’s wrong with her?” Unfortunately, they never had an explanation for it. The doctors would send us home. We felt hopeless, but we didn’t stop there.

Things got worse when we went on a cruise to the Caribbean. I had just turned 14 years old. I remember we were on the island St. Maarten and we knew it had to do something with the sun, but we didn’t think much of it. We ended up going to a beach and we thought getting an umbrella to put on the sand for when I'm at our spot was enough. We thought I would be also be fine in the water. And trust me we spent all day in the water. I remember when I got out of the water and we were drying off I was burning on my toes, that spot on my hands, that spot on my face and on top of my shoulders onto my back. It was the worst pain I have ever felt in my entire life. I remember on the way back to the boat I was balling my eyes out. As soon as I got onto the boat, I took a shower and it helped a little bit but not fully. One day we were looking through the TV channels and nothing good was on, so we clicked on a show called Dateline. This episode was about kids being ‘allergic’ to the sun. You could hear crickets in the room as all of our jaws dropped. That night my mom looked it up to gather more information about it. We knew then, I had this rare disease. The next morning my mom called my doctor. My mom demanded to her that I had Porphyria. My doctor never heard of it before, but she did some research on it and she came to believe that I had this disease. She met with me but ended up sending me to a dermatologist. The dermatologist said in her 40 years of working about 20 people have come to her and said that they have this disease, but they never did, So, she sent me to Hasbro Children's Hospital. Unfortunately, my visit was not what I’d hoped for. The staff didn't treat me like I was human, and the physician didn't believe I had this disease at all because of how rare it is. They made me wait hours and hours on end just because they thought I was wasting their time. It was awful. They ran a few blood tests and sure enough, everything was coming out positive. So, they transferred me to a specialist at Brigham and Women's Hospital in Boston. They ran a few tests and I was finally diagnosed on July 21st, 2016 at age 15.

We were so relieved! We finally knew what was wrong - but it doesn’t end there. When I turned 16, I started burning everywhere and not only to the sun but also to lights as well. Then at 17, I became very sensitive to heat and I even get burned on cloudy days as well. Now finally, I’m 18, and I always wear a hat and gloves. wear them inside as well. It’s affected my life so much because I’m a teenage girl. What do teenage girls do during the summer? Go to the beach and tan. I live 2 minutes away from the beach and I can never go. I want to be a normal girl, but I can't. Every time I do go in public, I have to wear a big hat that goes around, gloves, pants, and covered shoes. A lot of people laugh. And I mean a lot. People stare at me like I have some weird disease… oh, wait I do. I don't really mind when little kids stare at me or ask their parents why I look so weird because they don't know any better. However, when adults stare and make rude comments. That hurts. They should know better. It's no different than them staring at someone if they're bald because they have cancer or someone in a wheelchair. I just really want to be normal. It mostly affects me at school. One of my favorite classes is gym. I love playing all the games because I'm very crazy and energetic. I love playing with my friends. But when they tell me the classes are going outside and I have to get a pass to go to the library, it breaks my heart. I want to play with all my friends, but I'm not allowed to. Also, if we have a fire drill or an evacuation, I have to be notified so I can "get ready" for it. That wastes their time to notify other kids, for example, ones that have hearing aids, so they don't get blasted. It doesn't only affect my education but other people's education as well because if I start having a reaction and I need the lights turned off, if they turn them off it may disrupt someone else. However, if they don't turn them off, I need to go to the nurse and sit in the nurse for the rest of the time, so I miss out on everything they're learning. The hardest thing about this disease is that nobody else in my family has it. None of my siblings, parents, grandparents, aunts, uncles, cousins. Nobody. I am the only one in my family. But I am trying to make the best out of this disease. I don’t want to be known as a disease I want to be known as me. Since I do have this disease, I had the opportunity to go to Camp Sundown and it was the best week of my life. It was amazing finally meeting other kids who also live with this disease. They helped me understand that I’m not alone in this. I have them. We will all get through this together.