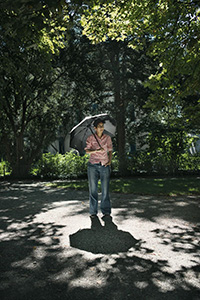 After having had the pleasure of getting to know many of you in person at the FDA workshop for EPP-patients last October in Maryland, I am glad to be given the opportunity to share my personal story as an EPP patient, porphyria researcher and patient advocate with you.

Like most EPP patients, it took me very long between the first phototoxic reaction at the age of 2.5 years and my diagnosis. One night in spring 2006, in my final year as a molecular biology student in Heidelberg (Germany), yet again I could not sleep because of the intense pain caused by the strong sunlight I was exposed to during my way home from university, despite having worn thick, long clothing, using an umbrella and walking in the shadow whenever possible. Like so many times before, I got up and searched the Internet for an explanation to my strange “sun allergy”. Excitingly, this time, I found a new article on Wikipedia, with the unfamiliar title “Erythropoietic Protoporphyria”. Those eight sentences written in lay terms just two weeks earlier by the beloved founder of the German EPP patient organisation, Verena Schmeder, described my life – and changed it in a way I would never have guessed: Today, I am in charge of the laboratory conducting all porphyria diagnoses in Switzerland, act as scientific advisor for the Swiss Society for Porphyria, am a co-founder of the International Porphyria Patient Network and represented the patient perspective during the approval process of afamelanotide (Scenesse®) at the European Medicines Agency (EMA).

But first things first: After finding out about EPP, it was overwhelming to meet other sufferers for the first time in my life. It was and still is impressive for me to see, how similar the experiences and coping strategies of EPP patients are: Since the majority of people around us do not believe how painful EPP is and how much it restricts all aspects of daily life, we tend to hide the condition and try to find our own ways in this world poisoned by light. Being a scientist, of course I also was fascinated to learn about all the aspects already known about EPP, like the fact that visible light is causing the phototoxic reactions and not UV radiation: Finally an explanation of why sunscreens never helped! And of course, I was intrigued by the many things not yet understood about EPP. In October 2006, Italian porphyria patients organized the first international porphyria patient day in Rome. There, I had the chance to discuss a few research ideas with the porphyria expert Prof. Elisabeth Minder from Switzerland. You can imagine my excitement, when she offered me a PhD position in her lab in Zurich! I joined her team in 2007 and my main area of research became iron metabolism and gene regulation in EPP.

During my time as a student in Elisabeth`s group, she conducted the first clinical trial ever testing afamelanotide (Scenesse®) in EPP. As an employer of the institute, I did not participate in the trials. However, I met fellow patients and was intrigued by the dramatic benefit this new therapeutic approach seemed to have on them. Then, thanks to enormous efforts by Elisabeth, nearly all patients in Switzerland could enrol in an early access program in 2012 and receive the afamelanotide treatment. Of course, I jumped at the opportunity but was rather sceptical and had limited expectations about the effects in the beginning but after overcoming the fear to be exposed to sunlight I experienced the same amazing, life-changing effects described by the others: Instead of a few minutes until the first symptoms started, I could now spend hours with friends and family outdoors! I also almost lost my aversion to be exposed to light because even if I developed a reaction, it would be much less painful and only last until the next morning and not up to two weeks as without the treatment. In the beginning, it felt crazy to choose the side of the street I wanted to walk on and not being restricted to the shadowy side! Thanks to the treatment I now have an almost normal life, I am able to make appointments to visit partner laboratories during day time, teach at the University of Zurich in spring and even attend scientific conferences in the summer, like the Porphyrins & Porphyrias congress this past June in Bordeaux.

In 2012, the approval process for afamelanotide started in Europe: Between 2006 and 2012, five clinical trials in Europe and the US with more than 350 participants were concluded, and all showed that afamelanotide helps EPP sufferers to stay outdoors for longer and to experience less pain. In contrast to the FDA, the EMA does not have a standard policy to invite rare disease patients when evaluating a potential therapy for their condition. In 2013, Dr. Rocco Falchetto, president of the Swiss Society for Porphyria, and I organized an international patient day in Switzerland. All representatives of the attending porphyria patient organisations, amongst others Desiree Lyon from the APF, took the opportunity and together we wrote a letter to EMA, asking them to include patients in the process. Indeed, in 2014, EMA for the first time in their history invited another EPP patient and me to participate at a full regulatory committee meeting directly prior to the drug approval decision. We think that bringing in the patient perspective was crucial to make regulators understand the true burden of EPP and the real benefit that the treatment with afamelanotide brings! Frustratingly however, the excessive and complex post-marketing obligations demanded as a condition for approval by EMA make the treatment nearly inaccessible for European sufferers - three years after approval, only patients from the Netherlands have unrestricted access. Currently, EPP patients all over Europe organize protests, engage in political discussions and start media campaigns to make their voice heard. Our experience also shows: In every country, dedicated physicians are absolutely essential to the process – and, if they really want to, they find ways to provide the treatment to their patients! The best examples are Italy, where patients thanks to Prof. Gianfranco Biolcati’s personal engagement had access from 2009 on, even before the approval by EMA, and the early access program Switzerland leveraged by Prof. Minder, which is not even an EU member state.

For me, it is inacceptable to not alleviate rare disease patients from their suffering if a possibility exists to treat their condition. What is the rational for research if patients do not benefit from it when a drug is successfully developed? Patients potentially risk their health in drug trials, agreeing to test new substances and hoping to contribute to a better future for themselves and their fellow sufferers, in particular children, who are affected the most. In the current health care systems however, patients have to wait for very long and even might never gain access to a safe and effective treatment, if interests other than the patients’ health are prioritized. Again and again we have to explain and justify ourselves to so many representatives of authorities, regulators, committee members and staff of health insurance companies who are in the position to either give us a life or send us back into pain and darkness. No porphyria patient chooses the condition he or she suffers from. Therefore, whenever possible, I support the efforts of EPP patients and other advocates with my knowledge and experience. Seeing which difference the therapy makes for the sufferers motivates me again and again to give my best every day. And I am optimistic that with the European experience and the exchange the patient organisations are now having between each other, approval and access will be faster and easier to achieve for other countries.

This is how I first became a scientist, then a patient, and now a porphyria researcher and patient advocate. Because of EPP, I will never be the outdoor biologist catching new species in the mud of a tropical rainforest that I always wanted to become. But because of the condition I got to know so many great people in the patient and research community, found a fascinating research area and witnessed the development of a new drug! I am looking forward to the many exciting new developments in the field of porphyrias and hope to meet many of you in January in Orlando! 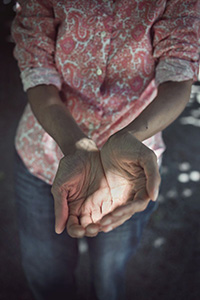 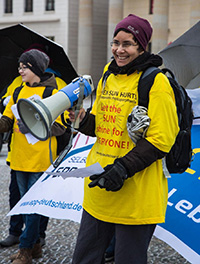