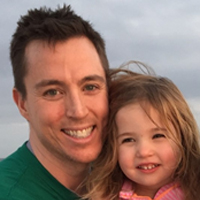 Thankfully, I don’t remember that heartbreaking day at a hometown Michigan beach as a young toddler – when my family learned I had inherited our family’s so-called “allergy to the sun.” The agonizing reaction to sunlight I endured, which left physical scars visible even today, was actually caused by what we now know as X-linked protoporphyria (XLP).  I have always enjoyed being outdoors and even played Little League baseball while wearing long sleeves and gloves (no matter the temperature).  My stubborn reluctance to say indoors despite my affliction with XLP resulted in many sleepless summer nights as a child in front of a fan, with cold compresses wherever I had been “burned.”  But that same “fighter’s mentality” back then is what has ultimately driven me into science and scientific research on the porphyrias as an adult and father of a daughter with XLP.  Now, after working in industry and education for years, I am finishing my doctoral program at the University of Georgia (Dailey Lab Group), where I am continuing the fight against the porphyrias “on the front lines” – as both patient and research scientist. See: http://www.daileylab.uga.edu/.