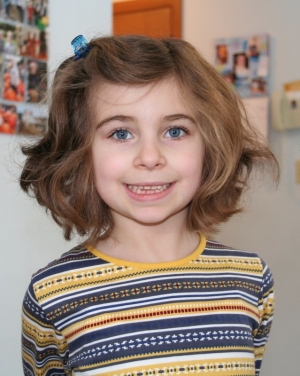 Nora began having difficulty in the sun during the summer when she was three. After being outside, she would cry inconsolably and in pain, sometimes for hours. The backs of her hands in particular seemed to bother her, and she would tell us they "itched." However, there were no outward manifestations-no rash, no swelling, no marks. We were stumped, as were the doctors we visited. At their recommendation, we tried various solutions, including Sarna lotion, Claritin, and weaning on and off various sunscreens-none of these worked. As a last resort, a dermatologist prescribed Benadryl, which worked only because it knocked her out.

Although there was we could see, we knew something real was happening. Throughout that summer and the next two summers, Nora would ask to leave pool parties, play dates, and other fun occasions because the pain was just too much to take. We resorted to staying inside.

Finally, one weekend in Nora's fifth summer, she developed a triangular, flat, purple lesion on her nose. It didn't look like a bruise or a scab, and we took her in to see the pediatrician on call, who was not our primary doctor. Thankfully, he had treated a patient with EPP twenty years earlier and recognized the disease. He directed us to the APF website, where we found an almost perfect match to her symptoms. We got a blood test as recommended on the site, and confirmed that she has EPP. Our regular pediatrician has educated herself about the disease, and even managed to speak with the wonderful Dr. Mathews-Roth on the phone. Nora now has her liver function and porphyrin levels tested annually.

We are so relieved to have a diagnosis, and we are now able to manage around her condition. Thanks to the APF, we have found Lumitene, which Nora starts taking in April to prepare her for the summer. It hasn't been a perfect solution, but, if she stays in the shade, she can participate in most outdoor activities for at least some period of time. Hats and clothing with sunblock provide less relief, as the heat of the sun seems to penetrate them and bother Nora. We also rely on COTZ sunblock.

We are fortunate to live in New England, so Nora is generally fine mid-fall through mid-spring. We visited Disney in Florida in February this year and, even with a build-up of Lumitene, COTZ, hats and sun-protective clothing, the sun was still too strong for her. We were shocked, as the temperature never exceeded 60 degrees. It was a startling reminder of her condition.

Nora attends a wonderful small, independent school that has accommodated her condition. When she started kindergarten, we sent a note to the staff with a link to the APF website. In another stroke of luck, one of the staff members was aware of porphyrias in general and that helped us in our education efforts. Thankfully, Nora doesn't need any accommodations for indoor activities, but the school does allow her to "sit out" physical education activities if she is getting too much sun which, at age seven, she is able to fairly accurately determine for herself.

Nora doesn't play summer sports or attend outdoor camps, but we've found some great indoor alternatives for camp, including a drama camp, cooking camp, and reading camp. She did play spring soccer this year, and was fine until the last week or so. She sat out the last few games in the shade and cheered on her team. We had prepared the coaches in advance for this eventuality and found them to be quite supportive.

In all, we think (and hope) that Nora feels like a "regular" kid!
—Maria Gulluni (Nora's mom)

A personal note from the APF:  In one of life's funny coincidences, the staff member at Nora's school who was familiar with porphyria is a friend of mine. I've known David for years, and his wife Judy, a doctor, is a dear friend. Judy was a medical resident, and was in the hospital with me when someone first suggested I be tested for AIP. After I was diagnosed, Judy learned about all of the porphyrias, and David learned about them through her and through me. So if you have porphyria, talk to your friends and family about it! You never know how you might be helping another patient along the way.  —Mira Geffner