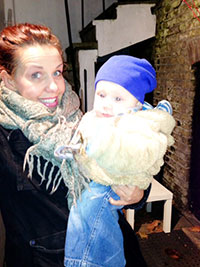 Oscar was born in London almost 3 years ago, and we stayed in the UK for 2 of the first years of his life. He was a healthy baby and almost never cried. The first time we discovered that he had some similar reactions to the sun as I had was when he was just under 1.  We were staying at my partner' fathers summer house that is in Iceland in a wooden cottage. It was a very hot August day, and we had mostly been inside and in the village and only made one short trip to the beach.

In the evening, Oscar was crying and uncomfortable - we had never seen him like this - and we pulled out all the stops. But as he was rubbing his hands and I was feeling kind hot and that tingling feeling in my hands, I thought maybe he did as well. Jonas thought it was strange ( I had not been diagnosed ) but it seemed to help if I did the things that worked for me - so cold water and when I sat with him on the back of the house where it was cold he seemed to be fine.  We left the house a day early due to the sleepless nights. We described what had happen to Jonas dad who is a doctor but he could not relate it to anything.

The following year we took a holiday to Menorca, Spain. We left early in the year to avoid strong sun. But when we got there it was hotter than normal. And Oscar started to react like he did in the summer house and again I put cold water and I sat with him on the balcony. We were debating whether to go back - We had a doctor come to the hotel but he just thought Oscar was over tired. We decided to stay we just avoided the sun - we went out early morning late afternoon. But now I was sure that Oscar was reacting the same was as I did - where it feels like you’re on fire if you are exposed to the sun. When we got back to the UK I was detriment to do something and I went to our doctor’s office and I think spoke to 5 Doctors who just took no interest. So in my mind I thought we just had some sun allergies or something.  We then moved back to Sweden, and I tried to go to Doctors here and we got referrals to the skin clinic but they said that what I described did not exist.

In May this year, Oscar got a spot at a school. I had told the teachers that he was really sensitive to the sun.  it was a really hot May and Oscar got sick right away - Jonas had to go and pick him up they had been out  playing in the sun and it was really hot inside as the air con was not working . When they got home Oscar sick and he had burn marks on his hands. It was awful.  But Jonas said that one of the teachers had said that she thought that Oscar could have this rare disease that her children had and she would bring the papers to the School.  The next day I went to pick up the papers - and it was like I had not been crazy for 30 years there really was a disease and other people with same experience.  I started reading everything and was of course sad and worried but also relived as at least now we would know.

To make a long story short it was then really difficult for us to get a referral to get diagnosed - even with papers and Oscars burnt hands the doctors were skeptical and once I got a referral they did not think it was urgent and we should wait until after the summer. I took matters in my own hands and got a blood test from the lab.  We have now gotten some help from a very nice professor in Stockholm and we are getting the medical help we need.  The results shows that we have x linked EPP - my son has a very high count which is very stressful and we don’t know how his life will be as we are the only case in Sweden. There is no one to talk to about it - someone with real experience.