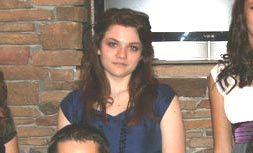 My name is Allison Linner and I am seventeen. I came into this world on a cold, rainy day in early October, but my Dad said that the moment I was born, the sun peeked through the clouds, thus my nickname, “Sunshine.”

For some reason, my parents always knew there was something wrong with me.  My life was dotted with strange symptoms, including lots of pain and lots of doctors for a girl my age.  Each doctor diagnosed me with something else.  When I hit puberty, things worsened. I had terrible episodes during which I would be doubled-over in front of the toilet, wanting to be unconscious because of the pain, but unwilling because I knew if I passed out I might choke on my own vomit.  The toilet even became my pew.  I fought to stay conscious while these other things were occurring. I could feel that my heartbeat was weak and irregular. Another strange symptom was that I was extraordinarily photosensitive.   When ill, I would lie on my bed with my eyes shut, a wet washcloth over my eyes, the blinds closed tight, and I would still be irritated by light.  This is one reason I thought I was just nuts.  I even had times when I experienced paranoia and hallucinations.  I would cry and pray hard. I wondered how my nickname could ever be Sunshine.

One of my most recent episodes was very hard.  It was this past summer, and I decided to be the chaperone at an outdoor pool party my sister was attending.  When I got out of the pool, one mom touched my face and said: “Oh my Gosh...you’re so pale.” I responded “Yeah, I get that a lot.”  When we got back in the pool, I suddenly felt very ill and with God’s help I was able to get home and then get to the doctor.

I questioned him, “In your professional opinion, do you think these symptoms that all of my different doctors have diagnosed over the years, are intertwined in some way?” He said, “No, there is no such disease that has all of your symptoms.”  But there had to be , I thought.”   I knew in my heart that each symptom was a puzzle piece and I realized that my family and I would have to play large roles in putting it together.

One day, my Dad and I talked a lot about what was happening.   He promised me that I would find out what was wrong with me, and what was wrong with us, since we shared similar symptoms.  At the end of our discussion, he jokingly said that maybe because we were so sensitive to light, we were vampires. He also said that there actually was a disease on which the legends were most likely founded. I thought I'd look it up, just for fun. Reading the list of symptoms was like reading the story of my life. It was actually a very spiritual experience, it felt like reading the scriptures.  A few days later, I went to the doctor and asked him if he could order the tests. He said “Sure, why not?” While waiting on the obscure test results, I performed at home the '24-hour urine test.' Within a few hours, my urine was a deep purple-red hue. A few short days later, the tests came back positive for Hereditary Coproporphyria (HCP.)

This is a hard disease to have, there is no doubt about it. I know what pain is. But every day, I thank our Father in Heaven that I finally know what ails me; and that I’m not crazy.  I’ve learned to cope with it daily.  When I do have flare-ups that is probably when I’m closer to God than any other time. It is so humbling. I am actually grateful for my disease because it does so much to compel me to be a better person.

When I turned 17 on October 10, my family gave me a card that has a cartoon sun smiling on it and it reads: “Happy, Bright, and Lots of Fun.” Inside, each member of my family wrote a little note to me. In my Dad’s message he wrote, “You don’t need the sun because you carry so much light inside you wherever you go.” I guess I’m still Sunshine after all.