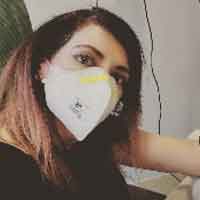 EMILY CARMEN aka EM C is an artist who represents and empowers the chronically ill and disabled in the music and entertainment industry. Her story began when Emily struggled for six years to find a proper diagnosis for her severe abdominal pain, sudden weight loss, severe limb pain and major heart rate fluctuations. Finally, Emily was diagnosed with Hereditary Coproporphyria (HCP). But it took another decade to find relief from her constant severe porphyria attacks!  Emily says it is thanks to monthly Panhematin with albumin that she keeps the attacks at bay. When attacks do occur, Panhematin and IV 5% to 10% dextrose is used to treat.  As you can see in the photos, treatment has helped Emily move from repeated hospital stays to a new career.

Emily Carmen is a long time APF member with Hereditary Coproporphyria. Despite her illness, her first single off her EP album is coming out Friday May 20th. Emily shares why she decided to return to music as her career and life purpose, "Throughout the years before I was undiagnosed, I was severely underweight due to constant debilitating abdominal pain that felt like broken glass, extreme pain in my arms and legs that made walking even a few feet nearly impossible and fluctuating severely low heart rate that dropped down to 25bpm. This made my late teens and my twenties a completely isolating time in my life. After having to leave my studies in film scoring at Berklee College of Music and being told by doctors, prior to my diagnosis, that I may never have a "normal life," I discovered I could write really catchy songs when I started to use my talent in composing music to express how devastated I was. I taught myself how to use digital audio workstations to record my songs and played every single instrument myself. Songwriting allowed me to have some normalcy and to express the frustration of being so scared and socially isolated with a chronic illness and medical disability. My friends pretty much ditched me, except for a few, so my time was very lonely. As I searched for a songwriter/performing artist to relate to, I realized that there were zero famous or well know performing artists who had a chronic illness and or disability, or at least talked about having one. When I discovered this, I made a promise to myself that someday, when I was able to manage my porphyria better, I would become that songwriter and performing artist for others that I had wished I had to relate to and have as a role DDDDDDmodel."

Emily continues to write songs that share what life is like for so many that suffer from a chronic illness and or disability. She says, “Each song is still relatable to the masses due to being able to be left to interpretation. The song ‘1950s Housewife,” is a song that can be interpreted as literally about a 1950's housewife, or it can be interpreted as someone having regrets about not taking certain risks that may have led them to a different life. Many with chronic illness and disability struggle with this.  I have spent so many nights wondering what would have happened if I had found my hematologist-oncologist sooner, and what if I had started iv treatment sooner. The "what if" is something to which we all can relate."

“1950s Housewife” is one of the very first songs Emily wrote prior to her diagnosis of Hereditary Coproporphyria. “1950s Housewife” will also have a music video released this fall, plus Emily is working on creating versions of the video that are accessible for the hearing and visually impaired.  You can hear “1950s Housewife” on all music platforms and even use it in a tiktok video starting Friday May 20th.  Please support Emily Carmen in her mission to represent the chronic illness and disability community in the music and entertainment industry. "We deserve an equal seat at the table in the arts and with the support of fellow porphyria patients, we can help to have a voice in the industry. It is about time the industry stops excluding the chronically ill and disabled from winning awards and being placed on the top forty charts." Follow and support your fellow porphyria friend! Instagram @EmilyCarmenMusic, Twitter @EmilyCarmen. Tiktok @EmilyCarmenMusic and www.EmilyCarmen.com .  We wish her well. If you have a talent you are using for porphyria or rare diseases, please let us know so that we can share your story and talent with other patients.