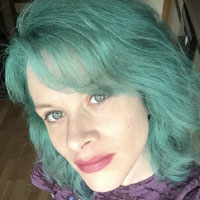 Hi, my name is Jennifer Boyd, and I have been living with HCP for over 20 years. My diagnosis journey was rough and similar to most but looking back I was kind of lucky because it only lasted about 3 years. Symptoms started slowly around the time puberty hit. My initial symptoms were the psychological issues, easily labeled as clinical depression, so doctors simply sent me off with pills. As years progressed so did the symptoms, I would often feel run down and just not myself.

At 19 I enrolled in beauty school, and that was when things got significantly worse. Daily exposure to the chemical fumes from hair bleach and perm solution triggered the nausea, vomiting, pain, and more. I knew it wasn’t the flu, my skin would burn with pins and needles, but there was no fever and it wasn’t going away. Visits to the ER resulted in the typical guesses of food poisoning, inflamed appendix, inflamed gallbladder, and of course, the infuriating hypochondriac. The worst comment by far came from the physician assistant who told me I was probably bulimic and should see a psychiatrist! Um...dude, I am in the ER because I want to know why I can’t stop vomiting, and you’re telling me I’m doing this to myself?! I ended up dropping out of beauty school, not because I thought it was making me sick, but because I was too sick to actually graduate. I continued to get poked, prodded, scoped and scanned with no answers.

Then pure luck hit when a friend of my mom, who had been diagnosed with AIP, noticed we had a lot of similar symptoms. After an endoscopy, that showed nothing and put me in the ER with a reaction to the anesthesia and then two- days later from the morphine, I asked my Gastroenterologist to test me for Porphyria. I got the typical ‘we’ll do the test to make you feel better, but that’s really rare so don’t get your hopes up’. The 24-hour urine collection showed that I have Porphyria!

The relief was overwhelming! Finally having a name for what was going on was an amazing feeling, proof this was not in my head and I did not have an eating disorder! At that point I weighed about 92 pounds and was on a dozen drugs to treat all the symptoms but were instead making me sicker. Once I was diagnosed, those drugs went in the trash and I started educating myself on this blood disorder and what it meant for my life. My diagnosing doctor was surprisingly humble and admitted that in medical school they spent less than one day covering Porphyria and the professor said there was very little chance of ever getting a patient with the disease. So, he actually grabbed his PDR, opened it up to the few pages that covered Porphyria and started making me copies so I could have as much knowledge as possible. Eventually I found a hematologist who had actually treated one other person with Porphyria, and I started to feel like I was regaining control of my life. While my symptoms were - and still are - always present to some degree, I started to learn my triggers and develop a routine to avoid them and what helped when the flare ups really took hold. IV infusions were a big help when my doctor was in private practice. But like many hematologists, she eventually became part of a hospital. The cost for sugar water became ridiculous, and now symptom management is even more about life routine and avoiding exposure to my triggers as much as possible. I only use three prescriptions, avoid 99% of OTC drugs, eat vegetarian and organic, avoid artificial perfumes and products with strong fumes, stay out of the sun and heat, and found the one type of alcohol I can have in limited amounts when celebrating feeling good! Homeopathic and holistic are my approach to life, and I find I much prefer having a DO for my primary care because they are less reliant on the prescription pad for treatment.

Porphyria is a part of my life and always will be, but it does not get to control or define who I am. Living with something most people have never heard of - let alone understand - forces us to be stronger than ever imagined. Porphyria may be considered rare, but for all of us who struggled so hard to get answers we also know it is overlooked and under-diagnosed.  So, we need to share our stories and spread awareness, hoping others do not suffer too long without a name for what’s wrong.