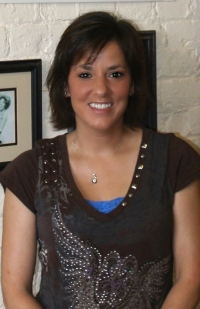 During the summer of 2009 I started having symptoms that were quite strange.  I noticed my urine was a dark copper color and was experiencing some slight pain in my stomach.  After visiting my family doctor a few times he decided to send me to an urologist to check for kidney stones.  I had a CT scan and the doctor did not find any signs of kidney stones, however the test did show a spot on my liver, which he dismissed and told me not to worry about at this time.

After continuing to have problems with my urine, and having my doctor say, “I don’t know what you are eating or drinking to make your urine this color”, I decided to try to drink more water and assumed it was just something quirky going on.  A few short weeks later, I started to develop large water blisters on my fingers, on both hands.  I also started to develop a strange rash on my forearms.  I was quite embarrassed by the rash and I was constantly changing the band aids on my fingers.  I even covered my arms with the tops of socks that I cut off to cover the rash.  I went back to my family doctor and he prescribed an antibiotic and a topical steroid cream.  After a couple more weeks, I called my doctor again and he decided that I needed to be seen by a dermatologist, immediately.

The visit to the dermatologist was more intense than I had expected.  Fortunately I was being seen by a wonderful doctor by the name of Dara Spearman.  She listened to my symptoms including the strange look of my urine and then she decided she would like to take a biopsy of one of the lesions on my arm.  I asked her what she was looking for and she looked at my daughter and me and said, “I think you have a disease called: Porphyria Cutanea Tarda”.  She said it is very rare and she doesn’t see it very often.   I was told to stay out of the sun, don’t sit near windows, stay covered up and use sunscreen everyday.  I walked out of her office with a full box of sample size sunscreen wondering, what in the world is going on! She also sent me to a lab for blood, urine, and stool tests.  I was quite concerned when they said it had to be shipped off to the mayo clinic to be tested.  She also had me checked for hepatitis.  I immediately came home and started researching Porphyria, it sounded quite overwhelming, but the symptoms were matching up perfectly.

After a week of waiting, my diagnosis was confirmed to be familial PCT.  My blood work also showed that I had had a bought with Hepatits B at one time.  My liver enzymes were also extremely high.

The hardest part of getting things rolling with treatment was having a hematologist willing to take my case.  My dermatologist told me I needed to start phlebotomy treatments as soon as possible.  Her office tried to contact a hematologist to get things started; it took over 3 weeks before a doctor finally took the case.  The first time I met with him he explained everything to me just as my dermatologist had; treatment would include phlebotomies and careful monitoring of my liver function, ect. He also admitted that he did not know a lot about the disease.

He set me up for my first treatment that very day, and it was terrible!  My blood pressure dropped to 43/70 and I passed out and ended up getting the shakes terribly bad!  I shook uncontrollably for about 20 minutes.  They finally gave me some Dilaudid to settle me down.  I was going in for treatments every four weeks and had the same reactions each time.  Now my nurse gives me dalaudin and an IV first to calm me down.  I am only 5’ tall and weigh about 105 pounds, so I am only able to give a small amount of blood each time, maybe 4-6 ounces if I’m lucky.  About two months ago, I started developing the rash on my arms again, so my doctor has me going in every 3 weeks for the treatments.   This summer has been rough dealing with staying out of the sun, ect.  I used to love lying out by the pool, getting that great tan.  I also love gardening and working in my flower beds.  I have lost interest in a lot of those things, mainly because I know the sun is my enemy.  I have adjusted to doing my yard work in the mornings or later in the evening.

Now, this probably sounds like a typical story for any Porphyria patient, however on top of this disease I also have multiple sclerosis, which I was diagnosed with about 4 years ago.  I only had symptoms of numbness in my face when I was diagnosed.  I was put on a medication called Rebif that I injected 3 times a week.  This medication is supposed to help slow the development of the lesions on my brain which can cause further problems with my ms.  The reason I mention the MS is because my doctor and I have come to the conclusion that the medication for the MS may have triggered the Porphyria and started to cause problems with my liver function.  Thankfully there are different options for the treatment of MS, so now I am doing a daily injection and it seems to be working quite well and doesn’t seem to be affecting my Porphyria.  I wanted to mention this situation because I do believe that I had Porphyria all of my life, however certain diseases or medications may cause it to rear its ugly head!!

I am very thankful for my family and their support.  My husband and daughter take turns going with me to my phlebotomy’s and have seen me at my worst, however they are always there to see me thru.

I am hopeful that thru my message, more people can understand how Porphyria can affect the lives of people who are living with it.  I am also hopeful that although there is no cure for this disease that more research can be done to help everyone understand and deal with it better.  No matter what type of Porphyria you have, we are all in this together and we can support and help each other – thank you to the American Porphyria Foundation for helping us all connect with each other.