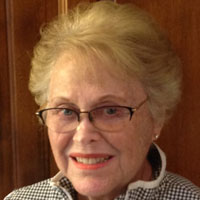 MY JOURNEY TO THE SHADOWS (Before & After PCT)
By Barbara Kuhn

I’m a person who loves lounging in the sunshine, not lingering in the shade, however, one day in my 80th year, a large blister appeared on my right thumb that would change my life forever. I had been doing some gardening so that’s what I thought had caused it. Like blisters do, it went away. A few days later there was a huge blister (much bigger than the first one) on my left big toe. I had no idea what had caused this one, but it was big enough to scare me. I lanced it on a Thursday, however, on Friday morning it was back in full bloom. I then headed to my dermatologist. He lanced it again and ordered blood and urine tests for me. On Saturday morning the blister came back for the third time, bigger than ever. I knew I was in trouble. The dermatologist’s office was closed, so I went immediately to an Urgent Care, where the doctor again lanced it, (for the third time), gave me an antibiotic by vein injection that lasted an hour, fitted me with a boot to wear on my bandaged foot, and told me “she was so sorry”. I let it go at the time because I was impatient to get home, but the words “I am so sorry”, and the compassion in her voice, kept creeping into my head. My blisters healed and at this time I was aware of no other related symptoms.

The prior twenty very stressful years were spent as caregiver for my Mother, who suffered from dementia and alzheimers, and my husband who had heart and renal disease. I lost my Mother in 2012 and my husband of 58 years in 2014. I thought I was handling it all well, but I was living on pure adrenaline. When my husband died, I suffered a long period of grief and my over-all health began to decline during that time. My emotional state might have had something to do with the onset of my problems. There was a muscle relaxant called Tizandine prescribed for me one week before the outbreak of the blisters, the timing seemed suspicious.

The blisters happened in April 2018. It was three months later before lab results confirmed my doctor’s suspicions. He had sent the reports back to the lab three times to get the correct diagnosis, as apparently the lab didn’t know how to read the results properly. He suspected: Porphyria Cutanea Tarda (PCT). I was told I had a serious condition, but nothing else. I began my research right away. I found PCT to be a rare blood disorder. I was told this is the stuff that vampires are made of and the sun had become my enemy. I have found that artificial light can also affect my symptoms, including the surgical lights of my dentist and dermatologist.

In retrospect, my symptoms had begun about five years earlier, however, I assumed it was merely the aging process. My gallbladder was removed in 2011 (age 74), but I was otherwise in good health. I first noticed that I was losing my hair, my eyebrows disappeared, my eye lashes thinned. My skin became very dry, my scalp itched constantly. The skin on my hands and arms became fragile, breaking open and bruising at the slightest touch of anything. When I got a wound, the skin would spread open, exposing two or three thin layers, taking a long time to heal, leaving white scars where the wounds had been. Sometime during this period, I tried to have my eyebrows tattooed, but my body would not accept the ink. All this was troubling to me, but no one alerted me to a problem.

As soon as I received the diagnosis in July 2018, I went to my primary doctor, who told me what she knew, admitting she knew very little, PCT being a mere paragraph in the medical journal. She then referred me to the City of Hope. The City of Hope, told me they couldn’t do anything for me and did not know what tests to order. They referred me to the University of Southern California.

My experience at USC was very unsatisfactory. I waited seven weeks for the first appointment. On the first visit, the Doctor drew blood and told me she would get back with me on the following Monday. Not hearing from the Doctor, after three weeks of numerous phone calls, I finally spoke to her PA, who informed me that the doctor had left for Europe that day and would not be back for four weeks. My blood pressure went through the roof. At this point, my desperation was obvious. I had no clue what I was dealing with and I wanted answers. The PA did what she could on the phone and gave me a prescription for Hydroxychloroquine, 200 mg to be taken daily. She set up an appointment for four weeks later when the doctor was to return, however, when I arrived on that date I discovered I did not have an appointment. Up goes my blood pressure again. After waiting for four and one-half hours, the doctor informed me “I was lucky, she had a cancellation and she was able to see me”. Lucky was not what I was feeling at that moment. She ordered an MRI for my liver and said she would see me in four or five weeks. Still no answers, only more tests.

During this period, at the direction of my primary doctor, I had five phlebotomies by a hematologist, which drastically reduced the iron in my blood, however, the porphyrins were at 100 times above normal and remain an issue. Lab tests were being ordered by every doctor (primary, hematologist, kidney, city of hope, and USC). My life was consumed with research, traveling to and from doctor’s offices, lab appointments, and hours and hours spent cooling my heels in waiting rooms. I was frustrated with the lack of knowledge and progress. I felt I was fighting a battle alone.

By this time ‘google’ had become my best friend. I was aggressively becoming my own advocate. The medical reports I had been able to read stated that with regard to PCT, hydroxychloroquine should be taken in dosage of 100 mg twice a week, quite different from what had been prescribed by USC. Because of my doubts and non-confidence in USC, I had not taken the medicine. I knew I really needed help and a doctor who knew what they were doing. This is when I reached out to the American Porphyria Foundation. I was shocked to learn that my options for the treatment of PCT in the entire State of California were an expert in San Francisco or an expert in training in Los Angeles. Since I live in LA County, I chose Dr. Simon Beaven of University of California Los Angeles. I drive two hours from my home in heavy Los Angeles traffic (USC was only one hour), but it is worth it to me. I had immediate confidence in Dr. Beaven and his staff and have been treated with respect.

The journey had taken me one year from diagnosis to treatment. In that year my symptoms had become much worse and increased in number. I watched in horror as I awoke one morning with dark brown blotches all over my face. I now shave my face every day to remove excess peach fuzz like hair (thank goodness for the Flawless Shaver). In the last 7 years, I have had 12 skin cancers removed, mainly on my face and hands. Most of the time my hands feel like they have been dipped in scalding water and they are very sensitive to heat, cold, and touch. I have cyst-like nodules on my fingers. On my face and hands, I have crusty tags that leave white scars when they finally go away. I am grateful my hands are the only real discomfort I have to endure, the rest is more cosmetic, but for a vain lady like myself that is still important.

I have been on the medication now for seven months. Symptoms are still present, but sometimes not as severe. I am trying to be patient and I’m so grateful this disorder did not arise earlier in my life, even though I find that puzzling. I do feel that if I had received proper treatment earlier after diagnosis, the additional symptoms perhaps would not have been so severe, if not at all.

I now wear long sleeves daily, long pants, large brimmed hats, and special gloves. I consider this a small price to pay to be able to continue on with my life as normal as possible. I have had my car windows tinted as dark as the law allows and an umbrella is always there for my protection. I have found that bright artificial light also affects my symptoms, especially the surgical lights of my dentist and dermatologist.

There will be no more lounging in the sun, however, I am finding ways to enjoy lingering in the shade. I attend a creative writing class on Monday, classical music appreciation class on Wednesday, and every Friday I attend a class in healthy aging which includes diet, nutrition, disease prevention, and application of Tai Chi and Qi Qong principles to maintain health while aging. Tuesday and Thursday mornings are reserved for doctor appointments and afternoons for my grandchildren’s sports activities.

In the midst of all this drama, since my doctor of over 25 years had retired without notice, I was in need of a new primary doctor. I began to search for a doctor who understood aging, since that is where I am presently at. Doctors were saying things like ‘you have had a good life’. That didn’t make me feel any better. I am more interested in the life I am going to have from this time forward. I also wanted a doctor who would look for the source instead of throwing drugs at the symptoms. I felt I was taking too many medications and I wanted to explore other alternatives.

I was referred by a friend to a doctor who specializes in anti-aging through integrative medicine and she has done a world of good for me. Within two months’ time, while following her program of diet, exercise, physical therapy, and natural homeopathic supplements, my vital numbers have responded positively. I dropped 10 pounds virtually without effort and she managed to pull me off two of my four blood pressure medications, while lowering my blood pressure. The results have been amazing and I am sure this will help my body respond positively to the treatment for my PCT. By combining traditional/integrative medicine, I think I am finally on the right track to good health again.

In the meantime I stay under hats and umbrellas, out of the sun as much as possible. That’s not easy when you live in Southern California, (sun shines on average 284 days a year.) I apply zinc suntan lotion every day. Visit my dermatologist every three months. My visits to UCLA are scheduled for every six months, when I am tested for progress. I have struggled to keep PCT’S impact on my daily life as low as possible, although because of the sensitivity to my fingers, it has prevented me from learning how to play the guitar, which was on my bucket list.

In this journey I have discovered that the responsibility for my health ultimately lies with me. I am very grateful to those who have helped guide me through this experience and I will allow them to teach me how to live with this disorder. I accept the fact that I will continue to age, and everything I do will be done a little more slowly than before, but what is important is that I age with dignity and grace.