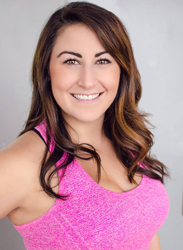 I consider myself to be a pretty confident, healthy, and strong woman with a whole lot of life to live. Life is beautiful and I never knew how much I took it for granted until 2016 hit me. I didn’t feel like myself at all. I was the heaviest I had ever been and couldn’t muster up the energy to get through the day. Juggling a full-time job along with a side hustle teaching fitness classes, I thought certainly I am doing all of the right things and leading a healthy lifestyle, what could possibly be wrong?

That summer, I received a lab work order from my gynecologist, which was totally normal, but I had misplaced it shortly after and didn’t think twice about it. Fast forward to my check-up in November with my doctor and he said “your liver enzymes are very high. Is everything okay? We need to keep an eye on these.” About three weeks later, I discovered my first huge blister on the top of my hand, which was incredibly painful. I went back into the doctor and they said, “Have you touched anything that could have potentially given you an infection?” Shortly after that, they started popping up all over the tops of my hands.

I was mortified by how my hands looked, not to mention, the pain I felt when anything came in contact with the tops of my hands. At this time, I was dating my now husband and we were preparing to leave the country to backpack in Spain. While on our trip, he proposed and I was ecstatic, but then the fear and embarrassment came over me. I knew what this meant – I was going to have to answer to why my hands looked the way they did. Forget the ring, I was hands down mortified.

Upon returning to the states, I decided that I needed to take matters into my own hands. I started doing some research and decided to see a liver specialist. Thankfully, Dr. Ashfaq was first on my list and someone I am grateful for to this day. I began seeing him on a monthly basis while getting lab work done every two weeks. He knew my anxiety surrounding this and treated me with such compassion. Every time I would go in to see him, they would weigh me and I would feel even more beat down than before.

I was overcome with panic, worry, and anxiety because no one could pinpoint what was going on. He said, “The typical candidate that has your liver enzyme levels is either (1) an alcoholic and/or (2) severely overweight.” I was an anomaly. The more time went on and the more tests he ran, the more anxious I became.

While I still hadn’t figured out what was causing the painful lesions on my hands, I determined that it would probably be in my best interest to see a dermatologist, who shall not be named. During my first encounter, they biopsied my hand and sent me on my way. I nursed an open wound for weeks and received no response from the doctor regarding the biopsy.

After some additional testing, Dr. Ashfaq ruled out Hepatitis C and determined that my porphyrin levels were off the charts, which was causing my elevated liver enzyme levels. Still not quite making the connection on how all of that would tie together, I continued to research on my own time. At this point, you could say research occupied a lot of my free time. Trying to connect these dots was very similar to how I feel trying to find a constellation in the sky.

It seemed that my life was a revolving door in and out of a doctor’s office. My hope, confidence, and resilience was slowly fading the more time went on. I feared not being in control when I was doing everything in my control to get better. I knew at this point I had to rely on the Lord and my support network to get me through these trying times. It wasn’t going to be on Murphy’s time, it was going to be on His time.

“You know, if you lose some weight, things in your body will start to change.”

“You need to lose 30 pounds and everything will improve.”

After I had exhausted all avenues, Megan Lyons, a fellow fitness instructor and health/wellness coach, caught me outside of the gym as she was leaving. We shared one thing in common – we were both fitness instructors – but outside of that, I really didn’t know Megan well. I am not sure what came over me in that moment, but I broke down to her. She showed me compassion and embraced me with words of strength and encouragement.

Thinking I had exhausted all avenues, she kindly offered to bring me in, take a look at my lab work, and see if there was any way she could help me. To this day, I still follow her supplement and nutrition regimen, which I have incorporated into my daily routine.

Though I had these tools in my tool kit, I was still trying to find someone to tell me what was going on with me.

As I continued to research the possibilities of what it could be, I thought it might be PCT based on what I had read online. Hundreds of Google searches later, I discovered the American Porphyria Foundation. After some clicking around the site and checking out the Board of Directors, I stumbled upon Dr. Karl Anderson’s name. Not only was he located in Texas, but he is one of the very few doctors in the country that specializes in PCT. I immediately picked up the phone, called his office, and left a message with someone hoping to hear back soon. Later that afternoon, I received a call back, from the man himself. In shock, I knew this was the Lord telling me something. This was His way of reigniting my fire to let me know that there would be answers, I just had to be patient and trust the process.

I connected Dr. Ashfaq and Dr. Anderson so they could discuss what was going on and together, they determined it was in my best interest to go see him in Galveston. Within two weeks, I was at UTMB meeting with Dr. Anderson and his staff.

It was confirmed that I had Porphyria Cutanea Tardae (PCT) caused by a mutation in the UROD gene. Because I was predisposed genetically for PCT, it could’ve laid dormant my entire without ever rearing its ugly head. Though we don’t know for certain what exactly caused it, I believe the birth control in large part was the major player.

After discussing all possible options, I determined that I would start my treatment with phlebotomies. I decided against the drug route initially because it was clear my liver wasn’t functioning properly and I didn’t want to send it into overdrive.

After two treatments, regular lab work, and maintaining a healthy lifestyle, I am now in remission. I now know what I need to do to manage my PCT moving forward. PCT doesn’t define me, but it is a part of me. The scars on my hands are a constant reminder that I am greater than my circumstance.

I believe that the Lord bestows some of the biggest challenges to the strongest, most resilient people. While He might test you, it is important to always be steadfast in your faith because you never know what life might throw your way.

My diagnosis changed my perception about the world and made me realize how sweet life really is. I no longer take my health for granted. I am grateful, unlike many with PCT, to be able to wake up every day and live a relatively normal life. Now, at 28 years old, I am a bit more lighthearted and know that with the Lord, anything is possible. I am a better person because of my PCT.