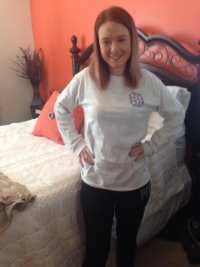 My Battle by Amanda Boston

I have Variegate Porphyria and Epilepsy. I am going to start off by talking about my Variegate Porphyria. For ones that don’t know about Porphyria and may not have heard of it before, it is a rare blood disorder and there are different types of it.  I have the type that irritates and affects the skin as well as the inside of me, my central nervous system.

My story started while I had a good job working at Anthem. I started getting a lot of blisters and skin lesions all over my hands, arms, and chest. That was followed by severe abdominal pain, hallucinations, nausea, and even purple urine.  My parents and I went to many emergency rooms, doctors, dermatologists, and everything.  No one could figure out what was wrong with me and would just accuse me of being a drug addict who just wanted pain medication. But I wasn’t. I just wanted some relief and to know what was wrong with me. Finally, a doctor in an emergency room said that he knew what was wrong with me and would have me feeling better in no time.

I was so happy and relieved that finally someone would help me. He said I had something called Guillain Barre syndrome and the treatment for it was called plasmapheresis. So, he started that treatment right away. Now with Porphyria you must be very careful with what medications and treatments that you take. Since that doctor unknowingly misdiagnosed me, I was given that wrong treatment that in three days later left paralyzed me from the nose down. I couldn’t do anything for myself anymore. I was put on a ventilator and a feeding tube. Many doctors came and looked at me and tried their best to figure out what was wrong with me, but all were dumbfounded.

One day a resident doctor came in and saw me and thought about Porphyria, because he had just learned about it that week, and the other doctors weren’t sure but tested me for porphyria and it came back positive. Right away they started me on Panhematin infusions. While there is no cure for Porphyria, Panhematin manages it and helps with my attacks. A few days after getting the infusions my mother was patting my hand and for the first time in a long time, I felt it.

I spent eight straight months in the hospital recovering and learning how to breathe and eat on my own. When I was finally able to go home, I still couldn’t do a lot on my own. I still had a lot of physical and occupational therapy to do, because I still couldn’t walk and do many other things on my own. But with time, patience, and therapy, I went from a wheelchair, to a walker, to a cane and now I can walk on my own without any assistance!!!

I still have bad days that I may need a walker or a wheelchair, but on most days, I can walk without any assistance. I still get Porphyria attacks every now and then but even though they are very painful, they are a lot more manageable because I still get Panhematin infusions every week.

I am really thankful for the American Porphyria Foundation because they have helped me a lot through all of this. They have encouraged me to share my story and battle with porphyria to hopefully encourage others battling Porphyria. Since having Porphyria, I have been busy helping others with porphyria by doing anything I can do. One way I help is by educating doctors and others in the medical field because since it is so rare, most doctors haven’t even heard of it before. Even my nana has helped me to educate doctors and others in the medical field by telling others about it when she has to go to the hospital or doctor’s office.

The American Porphyria Foundation makes such amazing literature about Porphyria that I can leave pamphlets they are able to read so that they can look back on it and remember what it is. Another thing that I have had the pleasure of doing is by helping on Porphyria studies. One study that I did was the Panhematin study. It was in Texas and I had the great pleasure of meeting Dr. Karl Anderson. He is one of the top Porphyria experts in the world and has served on the American Porphyria Foundation Scientific Advisory Board since its inception in 1982. Also, there was a Porphyria convention in Oklahoma that I was able to go to. Now I do live in Kentucky, but I made the decision that I really wanted to go so I traveled there by car even though it was almost a 10-hour drive. But it was amazing, and I really enjoyed it so much. Not only did I learn a lot about Porphyria, but I was also able to meet others with porphyria in person. There are so many people with Porphyria that I talk to on the Facebook pages, so it was so great that I was able to meet them in person and talk to them in person. I didn’t even mind the drive, because the drive was so worth it.

It really has been such a crazy and hard time with this illness, but I literally couldn’t do it without the wonderful friends I have made in my experience of having Porphyria.

Now I would like to talk about my Epilepsy. Epilepsy is a neurological disorder that can cause sensory disturbance and can cause some things like loss of consciousness, convulsions, loss of bowels, and other things due to abnormal electric activity in the brain. I had my very first seizure while I was working at Anthem, and I was coming back from lunch with some of my co-workers. Thank goodness I wasn’t the one driving us back this time. I had stuttered the entire time at the restaurant. Then when we were almost back at Anthem, I had a seizure. They immediately took me to the hospital, and I woke up from my loss of consciousness while I was at the hospital. I don’t remember the seizure or anything. Then after that I didn’t have another seizure until about two or three years after I had been home with my Porphyria.  I was living with my parents at the time, and I was just sitting back relaxing and watching TV with my little cousins.  They didn’t know what was happening with me, but it scared them, so they ran upstairs and told my parents that something weird was happening with me. My parents came downstairs and saw what was happening to me and they immediately called 911. After about two years of me not having any more seizures I moved out of my parents’ house because I thought it was finally safe to and so I got my own apartment and thought that everything was okay. I didn’t have another seizure until about a year later. Then one day, I was in my kitchen and I had a very bad seizure and my neighbor downstairs heard me and called 911 and my parents. I started having a lot of seizures, so I had to move back to my parent’s house because it was no longer safe for me to live by myself.   I was no longer able to drive legally, because after a seizure, you must wait 90 days until you can drive again, and you have to be seizure free during that time.   My parents took me to all my doctors’ visits, and I have a lot of doctor visits. I appreciate them a lot. All my seizures were Grand Mal seizures, which are the worst kind. To put it simply, Grand Mal seizures are a type of seizure that involves loss of consciousness and violent muscle contractions. I was just seeing my general physician about them, but since my seizures are so frequent, my doctor referred me to a neurologist.

Seizures can be deadly, especially if nothing is done to treat them. I am very happy that my general doctor referred me to her, because she is amazing. She is very professional but at the same time, she is very caring. After some tests she was able to diagnose me with Epilepsy. One of the tests that I had to do is called an EMU test which stands for the Epilepsy Monitoring Unit which is an inpatient done at a hospital which for me was done at Norton Brownsboro hospital which is an amazing hospital. It is specifically designed for patients with seizures. I was taken off my seizure medication so that I would have a seizure so that they could get the data they needed to characterize and guide my neurologist in my treatment decisions and to help me better be treated. I was also given an EEG, which stands for electroencephalogram.  EEG is a test used to evaluate the electrical activity in the brain. Small flat metal discs called electrodes were attached to my scalp with wires. They did find a cyst on my brain.  Even though it is non-cancerous, it still causes me a lot of pain. I get very severe migraines, and I get lightheaded a lot as well. I also get confused about things I should know, such as where places, people things, are and so on.

I was just told by my neurologist that I will be getting brain surgery in a few months, and surprisingly, I am not afraid. I am okay with it, because it will mean no more seizures, no more stuttering, and no more jerking when I am about to have a seizure. It will also mean no more days like today when I went to get my Panhematin for my Porphyria. I went in and the nurses immediately picked up that I wasn’t doing well, and my epilepsy was acting up.

I was stuttering badly, so bad that they barely could understand what I was saying. They also told me that my head was bleeding, and I told them all about myself falling that morning in my driveway. Prior to leaving to get to my appointment, I was walking to my car, and I was so shaky that my legs just gave out and I fell and hit the concrete hard.  I was so weak I couldn’t get myself up and no one else was home with me at the time. I called my mother, and she was able to send my sister who helped me up and into the house before I had to leave. The nurses were able to give me the medicine needed so I didn’t have a seizure.

It certainly has been a long road for me dealing with both illnesses, but it could always be worse. I may not yet be where I need to be, but I thank God I’m not where I used to be.

Editor’s Note:  We sincerely appreciate Amanda.  She has been an amazing porphyria advocate.  Despite her grave situation, she has diligently educated healthcare professionals and lovingly helped other patients as they endure similar struggles.   I know you will all agree, Amanda deserves our praise, prayers, and best wishes as she faces the upcoming brain surgery.  God bless, Desiree