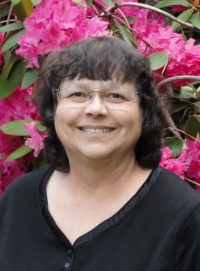 I come from a Central Oregon town with the population of about 1100 people. I moved back here to Central Oregon, where I was raised after 40 years of being away. I took my grandson to a local ER in Redmond, OR (population about 26,000) after an accident where he hurt his foot which needed to be checked out.  I was making small talk with him in the waiting room and told him of some new information about porphyria I had learned.  A woman in the waiting room overheard our conversation.  So, as it goes in small towns; we started talking.  She told me that she had porphyria also.

She was called in to see the triage nurse but her husband remained and we visited.  I exchanged contact information with him and we briefly traded stories. She came back in the room shortly. My first question after finding out what kind of porphyria she had (AIP), I asked her how she was diagnosed; as I knew of my own 'war stories' of finally finding the correct diagnosis.

Her story was similar to mine and other porphyria patients, being brushed off by many regular doctors who do/did not understand the cluster of symptoms or level of pain involved during a porphyria attack.  If your symptoms don't exactly fit a text book illness model then it is all in your head been-there-done-that. I was diagnosed about a year ago after several Oregon doctors turned their back on me not wanting to deal with the local medical political climate. The few who didn't turn me away hung in there with me and saved my life.

My new friend (from the ER waiting room) was diagnosed about 14 to 16 years ago in Eugene, Oregon.  She was deathly ill, hospitalized and was first diagnosed with  Guillain-Barre syndrome,  yet they still did not know exactly what was going on with her. Her doctors were all puzzled.

She had one doctor who used her personal three days off from work researching the internet on her behalf and wondered if she might have porphyria.  This doctor did the porphyria testing and sure enough she nailed the correct diagnosis of AIP. Those kind of doctors are few and far between.

What I find amazing about our chance encounter in the local ER waiting room was that we both found out we were afflicted with this very rare disease in a sparsely populated area. One of us being among only approximately 1 in 100,000 porphyria patients affected in the US. It makes our chance meeting even more amazing...

My personal take on just how rare porphyria is: there are probably more porphyria patients out there that could be identified if our doctors had more exposure in their training about the disease; and lab technicians were trained to collect the specimens and process the samples correctly. That is my nickel's worth...