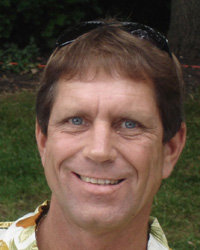 My Porphyria story starts in 1962 at my mother's funeral. She was only 32 when she passed away from neurological Steve Stevenscomplications brought on by Acute Intermittent Porphyria (AIP). Of her two sisters and three brothers, only one brother did not have AIP. Back in those days the doctors were only familiar with two types of Porphyria. All case were either AIP or sunlight skin sensitive.

The only test available for my mother was her urine turning dark when she was having an attack, and the only treatment she received was morphine or demerol for the pain. There was no Panhematin, and when she had an attack she would be admitted to the hospital for the duration, staying sometimes up to two weeks at a time. It is suspected that both my grandparents were carriers because of the domination of this disease in my family. All four of my mother's siblings who did have the disease had attacks throughout lives and passed away young. My sister had this disease and passed away from complications from it in 2004. One of her children has been diagnosed with this disease. I have several cousins who have either been diagnosed with Porphyria or have the symptoms and pain associated with it.

I lived most of my life without showing Porphyria symptoms and thought since my sister had it, I would not get it. That all changed in February 2008 when I started noticing I was having shortness of breath and my fingers and hands started tingling. I went to my family doctor and told him of the symptoms and he thought the tingling was due to carpal tunnel syndrome since I repair computers and use my hands all day long. He made an appointment for me to see a pulmonologist for my breathing difficulties.

Results of tests on my lungs were fine, but I was diagnosed with both Restless Leg Syndrome and a sleep disorder that was making me tired all the time. After taking assorted medications for sleep and my energy level for several months, I reminded my doctor that Porphyria runs in my family and that all of my neurological problems were similar to Porphyria symptoms. By this time I was also having many other symptoms, including stabbing pain in my legs and back.

The doctor wanted to repeat some sleep studies, and I asked him if he knew what Porphyria was and he said the only thing he knew was that the urine becomes dark when an attack is going on. He referred me to a hematologist for Porphyria testing, and the first words out of her mouth were that she thought I didn’t have Porphyria. Around the same tme, my family doctor told me my symptoms resembled Hemochromatosis, and I was tested for that while I waited for the Porphyria blood test results to come back. My tests were positive, but the hematologist was not sure if I had AIP or HCP. To find out, she sent me to Dr. Steven Shedlofsky, a Porphyria specialist and APF advisory board member about two hours from my home in Lebanon, Ohio. I submitted the required stool sample and 24-hour urine in advance, and my wife and I drove to Lexington in mid-September.

Dr. Shedlofsky confirmed that I have acute Porphyria, but changed the diagnosis to VP because of the pattern of porphyrins. Since then, I have received several series of Panhematin treatments, as I have continued to have Porphyria attacks. My daughter spent part of a day trying to locate me another doctor who was familiar Porphyria and found a Hematologist named Dr. Douglas Hawley. I met with him at the end of January and he suggested that I be put on a regimen of monthly Panhematin treatments and another PBG Deaminase test be done. He also felt since I would be receiving monthly treatments that I have a mediport inserted instead of using my veins. I agreed because I had trouble with a couple veins when I received the treatments at Christmas.

I am 55 and have learned not to take life for granted. I am  thankful for the doctors who are treating me today, I watch what I eat and am aware of the drug list, and check to make sure all of my medications are safe for Porphyria patients. I will have my children tested for Porphyria, and I pray they don’t. I know there is no cure for VP but I am trying not to let it dictate my life. I feel confidant that I will be able to live a long and normal life even though I have VP.

Steve has gathered a local/regional support group for people near his home in southern Ohio who are dealing with porphyria. Thanks Steve, for your tireless generosity and for opening your heart and home to us all!