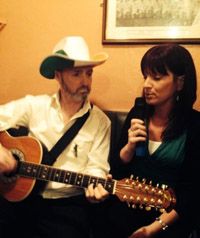 Hi my name is Tony McLaughlin I'm 52 and from Yorkshire in the UK but now live in Galway, Ireland.

"I was diagnosed in 1993 with VP after my sister found out she had VP.  My sister went to see a cardiologist on an unrelated matter, and the cardiologist recognized the skin symptoms, which given its rarity, was a lucky break.  Thereafter, and they tested the rest of the family.

I have 2 grown daughters.  One was also diagnosed through genetic testing as having VP, but she's 24 with no symptoms, although she has to be careful with unsafe drugs and the sun.

Since 1993, I was relatively stable apart from fragile skin in the summer, that was until 2010 when I had a severe attack exacerbated by dithering doctors who didn't believe all my symptoms were due to Porphyria.  They kept treating me for other things until my wife stepped in and read them the riot act.  They quickly changed their tune and handed me over to a different team who got the Heam Arginate for the UK (in USA Panhematin) and saved my life.  However, because of the delay, I'd developed all sorts of symptoms that took time to sort themselves out.

Since then, I've had 5 more attacks, but I recognize the symptoms early got myself to the hospital and have been treated with Heam every time.

All of my attacks have been caused by pain from other conditions, notably Kidney stones and back pain.  Hopefully, if we can stop the triggers we can stop provoking my attacks."