Two of Me: Living with Porphyria

Two of Me: Living with Porphyria, which chronicles the lives of seven people around the world living with acute hepatic porphyria (AHP)—a rare, genetic disease with debilitating symptoms and potentially life-threatening attacks. Directed by Emmy-nominated filmmaker Cynthia Lowen and developed in collaboration with the AHP community, the film is a story of human strength, perseverance and survival.

Over the past several years, Alnylam has had the opportunity hear and learn from those living with AHP firsthand. Many common themes emerged in their stories, including the challenges in receiving a diagnosis, the immense physical, mental and emotional toll of the disease, as well as its impact on relationships, careers and aspirations. Through compelling personal interviews, Two of Me: Living with Porphyria explores these key themes and aims to inspire viewers to “Tell 15” others about the film to generate greater awareness of AHP and help shorten the 15 years it can take to reach an accurate diagnosis.

On February 28, 2022, Two of Me: Living with Porphyria will be available on PinpointAHP.com 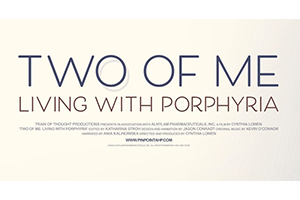