Please note that the symptoms and treatments for AIP are applicable to Variegate Porphyria (VP), Hereditary Coproporphyria (HCP), and ALAD Porphyria (ADP). Unlike AIP and ADP patients, however, VP and HCP patients often develop photosensitivity.

Acute Intermittent Porphyria (AIP) is a rare disease that is usually inherited from one parent. It is almost always latent (i.e. does not produce illness) in childhood and is usually latent in adults throughout life. When the disorder is active, it can cause intermittent attacks of abdominal pain as well as a variety of symptoms, which range from mild to life-threatening.

After the correct diagnosis of AIP is made, simple precautions can be taken to prevent attacks. It is important to check all relatives of Porphyria patients for the genetic defect, so they can take the same precautions and avoid becoming ill from Porphyria. Even relatives who have never had symptoms should be tested, as described below.

Laboratory tests are the keystone of diagnosis in AIP. Because signs and symptoms are nonspecific, test samples should be handled with care and sent to a laboratory of excellence for testing and subsequent evaluation. A laboratory overseen by a Porphyria specialist would be the best choice.

The enzyme porphobilinogen deaminase (PBG-D) is abnormally low in the liver and in most other tissues of a patient with Acute Intermittent Porphyria. This is true whether or not the patient has clinical symptoms or biochemical activity of the disease. Activity of this enzyme can be measured fairly easily in red blood cells. This is a useful test, particularly for evaluation of relatives of previously diagnosed patients with known low levels of PBG-D. This enzyme was formerly known as uroporphyrinogen-1-synthase (URO-S), a term still used by some laboratories.

However, there are some practical difficulties with the red cell assay: 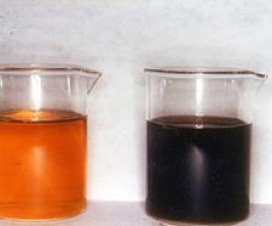 The amount of porphobilinogen (PBG) in urine is increased during attacks of AIP. PBG is a porphyrin precursor, not a porphyrin. The Watson-Schwartz test or the Hoesch test is used in many hospital laboratories as a qualitative test of the urine to determine whether there is an increased amount of PBG. The result is reported as "positive" or "negative", but the actual amount of PBG is not measured. Measuring the amount of PBG in a 24-hour specimen or even a spot sample of urine is a much better test. A very high urine PBG, when determined by a reliable method such as the Mauzerall-Granick method, is diagnostic for the presence of an acute Porphyria.

There are three acute porphyrias that can cause increases in PBG, namely AIP, Hereditary Coproporphyria (HCP) and Variegate Porphyria (VP). Acute attacks can occur in all of these conditions. Skin photosensitivity can occur in HCP and VP, but not AIP.

There are several considerations to keep in mind regarding PBG measurements:

IF THERE IS A CLINICAL SUSPICION OF PORPHYRIA 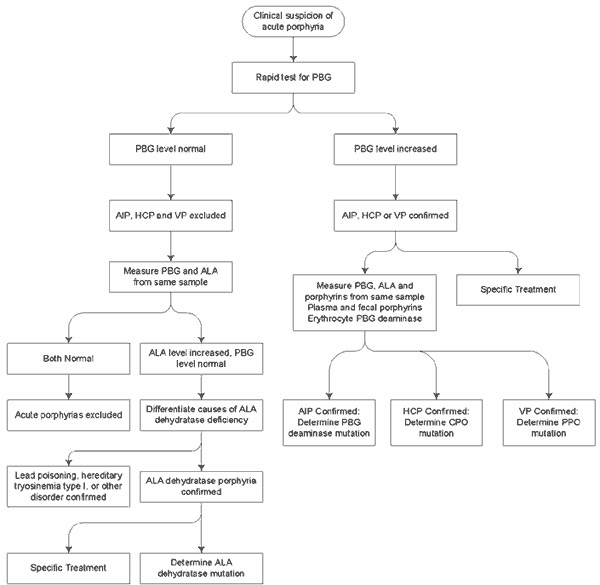 Signs and symptoms of AIP usually occur intermittently and include abdominal pain, constipation, muscle weakness, pains in the arms and legs, insomnia, emotional difficulties, rapid pulse, and high blood pressure. Muscle weakness can be severe during a prolonged attack due to the effects of Porphyria on nerves that control muscle. In fact, all symptoms of AIP appear to be due to effects on peripheral nerves, the nerves in the abdomen or the central nervous system. Precisely how Porphyria produces pain and other symptoms related to the nervous system is not yet well understood. PBG is produced in excessive amounts by the liver in AIP, but it has not been proven that excess PBG can damage nerve tissue.

Because Porphyria is rare and its symptoms often suggest other diseases, the correct diagnosis is often delayed. Attacks due to harmful drugs commonly occur before AIP is recognized. Symptoms of Porphyria can develop in some people but not in others who inherit AIP. If they occur, symptoms are characteristically intermittent. Some reasons for this variability are as follows:

Certain drugs are extremely important in exacerbating AIP. Patients with AIP are often treated with harmful drugs such as tranquilizers and sedatives before the disease has been diagnosed. This may lead to a severe attack. Porphyria will improve greatly after these drugs are stopped. Severe and fatal attacks are almost always related to the use of harmful drugs. This is one very important reason for testing blood relatives of known Porphyria patients to determine if they have the genetic defect.

Recommendations about drugs in AIP are based on specific test results and experience in patients with Porphyria in whom attacks have been caused by drugs. Since most new, commonly used drugs have not been tested, they should be avoided if at all possible. If a question arises, a physician or medical center specializing in Porphyria should be contacted.

You will also find a searchable database of safe and unsafe drugs on this website.

Pain can be the primary and only complaint of a patient in a porphyric crisis and sometimes for some time beyond. Appropriate pain measures should be applied and it would be unwise and not good medicine to overrule a patient by withholding medication.

Hospitalization is often necessary for acute attacks. Medicine for pain, nausea and vomiting along with close observation are required. Initial treatment of AIP attacks consists of stopping harmful drugs the patient may be taking and providing a high intake of carbohydrate (300 grams or more per day). Carbohydrate can be given either in the form of an oral carbohydrate or by intravenous infusion. Intravenous infusion is better in moderate or severe attacks or for patients who are unable to ingest enough carbohydrate orally. Pain, anxiety and emotional symptoms should be treated with safe drugs. Attacks with muscle weakness occasionally require respiratory support, but this is unusual unless an attack is brought on by prolonged administration of harmful drugs. After recovering from an attack, a patient should continue to eat regularly, because there is good evidence that skipping meals or fasting is harmful.

Heme therapy is a treatment for AIP that is given intravenously. It is useful during severe attacks. The best results are achieved if heme therapy is started early in the attack. It is also administered to prevent attacks that are readily predictable. Heme therapy is commercially available through Recordati Rare Diseases as Panhematin®. Panhematin® is less likely to produce phlebitis if it is mixed with human albumin before it is given. Directions for preparing Panhematin® in this manner can be obtained from Porphyria specialists (and are available  from the APF as part of the ER Kit). Panhematin® therapy is seldom indicated unless the diagnosis of acute Porphyria is proven by a marked increase in urine PBG. How heme therapy should be used to prevent attacks is not well established.

Heme arginate, which is marketed in some other countries, is another preparation of heme therapy for intravenous administration, but it is not available in the United States.

AIP is particularly dangerous if the diagnosis has not been made and if harmful drugs are continued. The prognosis is usually good if the disease is recognized and if treatment and preventive measures are begun before severe nerve damage has occurred. Although symptoms usually resolve after an attack, some patients develop chronic pain. Nerve damage and associated muscle weakness can improve over a period of months or longer after a severe attack. Long term expert physical therapy and other rehabilitation therapies are essential. In addition, mental symptoms may occur during attacks but are usually not chronic.

AIP patients prone to attacks should eat a normal or high carbohydrate diet and should not greatly restrict their intakes of carbohydrate and calories, even for short periods of time. If weight loss is desired, it is advisable to consult a physician who may then request that a dietitian estimate an individual's normal caloric intake (this varies greatly from one person to another). Then it may be appropriate to prescribe a diet that is approximately 10% below the normal level of calories for the patient. This should result in gradual weight loss and usually will not cause an attack of Porphyria.

Pregnancy is tolerated much better than was formerly believed. Offspring have a 50% chance of inheriting the gene for AIP, but the great majority of those who inherit the gene remain "latent" for all or most of their lifetimes.

Patients with frequent intermittent symptoms should have access to physicians who are familiar with AIP and with the patient's specific medical problems. Psychiatric support is sometimes helpful as well, because emotional problems may continue even with appropriate medical treatment. If new symptoms arise, diseases unrelated to Porphyria should be suspected. Like anyone else, AIP patients may develop other illnesses.

Most individuals who inherit AIP seldom have symptoms if certain precautions are taken. The following general recommendations are made for individuals with low PBG-D blood test results: