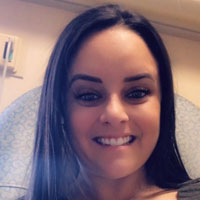 I was diagnosed with Varigate Porphyria in July of 2019. Prior to being diagnosed I went through four months of being in and out of the hospital with the most excruciating stomach pain and debilitating nausea I have ever experienced. I was beginning to feel hopeless every time I would leave the hospital without answers. After countless tests, procedures, hospital stays and misdiagnoses from other hospitals, Bryn Mawr Hospital was able to diagnose me through a twenty-four-hour urine test.

After months of being poked, my veins started to collapse, and scar tissue began to form. I had PICC line after PICC line and finally my Hematologist spoke to me about getting a port. There was no question in my mind that this is what I needed to do. I scheduled my port placement for August 16th. To say I was petrified would be an understatement. I tossed and turned all night the night before and felt like I could get sick at any moment. I went in the morning not knowing what to expect. They did blood work and I changed into my robe. I was told that I would be having a conscious sedation and that made me even more nervous. I have never been a fan of needles, so that scared me too. They finally wheeled my back to the operating room and started prepping me. I’m not going to lie, it’s an eerie feeling being awake in the operating room.

The next thing I knew, I felt a few numbing needles in my chest and neck and was given some medication to help me relax. The procedure lasted about 30-40 minutes and was so easy! I made myself overly nervous for nothing. The pain after the procedure was minimal. It felt like I had a stiff neck from sleeping wrong for a few days. I was on the beach the next day enjoying the sun and listening to the waves crash. I had to stay under the umbrella because of the dissolvable, external sutures and glue, but it was so worth it. I have a very low pain tolerance and was concerned I was going to be in a lot of pain following this procedure, but I was pleasantly surprised. I have a little scar on my chest about an inch big from the procedure.

Getting a port was the best decision I could’ve made. I currently go twice a week for PanHematin treatments.  Having a port has been life changing for me. Although I still feel a little pinch at each treatment, it is nowhere near as invasive as before. The first time using the port was intimidating and scary, but now I know what to expect. It’s a piece of cake! I have developed such an incredible relationship with my nurse and am so comfortable with her. I’m thankful that I was given this life changing procedure and that I’m able to get my medication so easily. If you are contemplating getting a port, please do your research to understand the amazing benefits. It was the best choice I could’ve made as I move forward with the management of this disease. And to think I used to be afraid of needles.