It has come to our attention that some patients who have been diagnosed clinically as having Acute Intermittent Porphyria (AIP) or another Acute Hepatic Porphyria (AHP) could not be confirmed by either biochemical or DNA testing. Biochemical testing is the demonstration of increased urinary ALA and PBG, and these values are highest during an acute attack when patients are symptomatic. Some patients can have high levels in between attacks as well, but not all. Positive diagnostic values should be increased greater than 5 times normal, not just a slight increase (less than 3 times normal) which can occur with dehydration. Most commercial laboratories and in particular the Porphyria Lab at the University of Texas Medical in Galveston which is run by Dr. Karl Anderson, will perform these tests properly. It is important that the doctor order urinary ALA and PBG and not a "porphyrin profile."

DNA, or molecular genetic testing, for the acute Porphyrias is performed by sequencing the causative gene for the three major acute Porphyrias and finding a specific pathogenic lesion on the gene, called a mutation. The technique used for DNA testing is at least 98% accurate, and patients with significantly elevated PBG are most often found to have a specific mutation.  In our experience of testing over 1000 patients with or without elevated urinary PBG, only a few cases did not have a specific mutation. For these patients, we undertake special testing to look for gene deletions or other aberrations that would be responsible for a cryptic mutation.

During the last few years, our experience with DNA testing for the acute hepatic Porphyrias has revealed certain mutations which are not pathogenic but are relatively frequent in normal individuals who do not have any acute hepatic porphyric symptoms. These are called polymorphisms and they are benign. When we recognize patients who have such polymorphisms, we continue to look further at their DNA to see if we can find a pathogenic mutation in addition. If no pathogenic mutation is found, we would have to classify or reclassify these patients as not affected. As you may be aware this has created great concern for patients who respond well to acute Porphyria treatment that their treatment would be discontinued. We appreciate this concern and would like to have such patients’ physicians contact us so that we can discuss their situation, recommend additional testing to determine if their symptoms may have been misdiagnosed and institute appropriate treatment.

AIP is the most common of the acute Porphyrias.

The most common symptoms are acute attacks of severe abdominal pain, back pain, pain in the arms and legs, nausea, vomiting, rapid heartbeat and other symptoms. These attacks generally last for several days, and can be sporadic or happen frequently (~once/month). These acute attacks are very rare in children before puberty.  Attacks are often provoked by certain drugs, alcohol, hormones, infections, and perhaps stress. HCP and especially VP may cause blistering skin photosensitivity as well as acute attacks; AIP has no skin involvement and is characterized by these acute, multi-symptom neurological attacks.

A diagnosis of one of the acute Porphyrias is made in two ways:

There are many misconceptions about the urine PBG testing, its reliability, and urine color of patients with acute Porphyria. The urine sample for PBG testing needs to be protected from light; the sample should be wrapped in tin foil or placed in a brown opaque bag after collection. However, if the sample is exposed to light for a little while (a few minutes) this will not affect the results. Please follow the directions provided by the laboratory when doing this testing.

Urine PBG testing can be sent to many labs including Quest, LabCorp, Mayo, ARUP, UTMB and Mount Sinai; they all do this testing reliably.

Many patients have urine that is red/purple in color when they have an acute attack, but this is not always the case. Patients can still have elevated urine PBG levels even if their urine color is normal. These misconceptions may lead to improper testing, or misdiagnoses. Physicians who suspect a patient has an acute Porphyria should call one of the expert Porphyria centers in the US to consult (http://www.rarediseasesnetwork.org/porphyrias/index.htm).

The Difference between Active and Latent Acute Porphyria

It is important to know that ~80% of people who have changes in their Porphyria genes (called mutations) never have symptoms of the acute Porphyrias. These people are said to have “latent acute Porphyria.”

If someone has a mutation in an acute Porphyria gene and reports symptoms similar to an acute attack, their urine PBG level should be checked. If the urine PBG level is normal then there is likely another cause to this person’s symptoms. Acute attacks are distinguished from other conditions that cause abdominal pain by very high PBG levels.

For patients with confirmed diagnoses, during acute attacks Panhematin® infusions are administered as treatment and the pain is managed with various other medications. For more information on Panhematin® please visit our Panhematin® for Acute Porphyria page or panhematin.com.

If someone who does not have a confirmed diagnosis of acute Porphyria, documented by very high PBG levels, is having symptoms that seem consistent with an acute Porphyria attack, Panhematin® is administered at the discretion of the treating physician. Generally all other causes of abdominal pain which are much more common than acute Porphyria should be ruled out first. If Panhematin® is administered and subsequently the diagnosis of acute Porphyria cannot be confirmed by elevated urine PBG values or DNA testing, then it would be concluded that the “attack” is not caused by an acute Porphyria. Even after Panhematin® treatment, or after an acute attack has passed, the urine PBG levels should still be elevated for several days to a week. These levels may not be as high as they were during the acute attack, but will still be elevated. 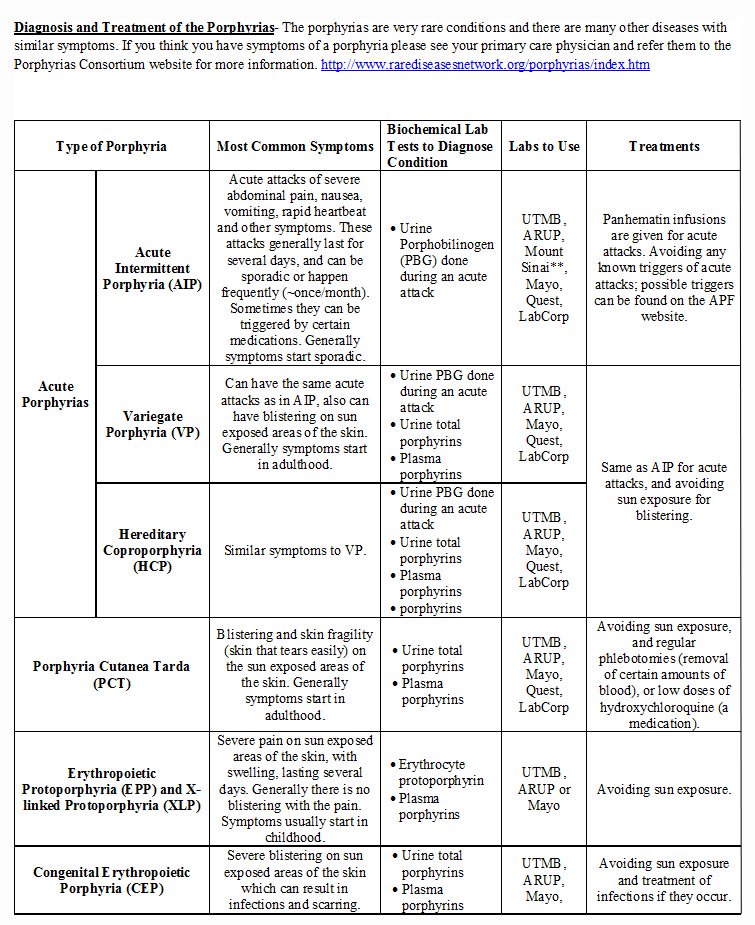