The porphyrin precursors porphobilinogen (PBG) and aminolevulinic acid (ALA) and porphyrins are readily measured in urine. Normal urine contains appreciable amounts of these substances, and different individuals may have widely different levels. It must also be remembered that "normal ranges" do not necessarily include all normal people. Therefore, small increases, especially in porphyrins, are not always significant.

ALA is an amino acid, and PBG is a pyrrole. Both are colorless, but when present in large amounts in a solution such as urine, PBG can spontaneously form uroporphyrin, which is reddish, and other products that are brownish.

The Mauzerall-Granick method and variations of that method are preferred for measuring ALA and PBG and have been available for many years. The test involves first separating ALA and PBG from each other and from interfering substances in urine, and converting ALA to a pyrrole. Ehrlich's reagent, which reacts with pyrroles (and some other chemicals) to make a colored substance that is readily seen, is added, and the color is measured separately for both ALA and PBG with an instrument called a spectrophotometer. The Watson-Schwartz test and the Hoesch test are qualitative tests (result either positive or negative) for PBG that also use Ehrlich's reagent; they may lead to false positive results if the person doing the test lacks experience in interpretation.  These two tests are rarely used if at all. If a qualitative test is positive, a quantitative assay should be done later on the same sample. 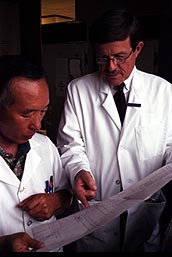 Because PBG is generally so strikingly increased during an attack of acute Porphyria, quantitation even on a spot sample (rather than a 24 hour collection) is highly informative. Requiring a 24 hour urine collection for quantitative measurements during an attack may result in considerable delay in confirming the diagnosis. Furthermore, ALA and PBG may drop considerably (especially in Hereditary Coproporphyria (HCP) and Variegate Porphyria (VP)) if there is a delay of several days in collecting a 24 hour urine.

Measurement of PBG in serum is useful when acute Porphyria is suspected and urine cannot be collected—for example in patients with kidney failure. Serum PBG is increased in serum in the acute Porphyrias, although when kidney function is normal, the concentrations are lower than in urine.

Porphyrins are tetrapyrroles (composed of four pyrroles). Porphyrins in their oxidized forms are reddish in color and are also fluorescent. Fluorescent substances, when exposed to light at certain wavelengths, emit light with a different wavelength. Porphyrins appear intensely red when exposed to long-wave ultraviolet light (UV-A). This makes them visible with a Wood's lamp, and enables them to be measured accurately with a spectrofluorometer. Within cells, all porphyrins that are intermediates in the heme biosynthetic pathway, with one exception, are in the reduced form, and are colorless and nonfluorescent. The last intermediate, protoporphyrin, is an oxidized porphyrin. Porphyrins that leave the cells and appear in blood, urine and feces are mostly oxidized and appear reddish to the naked eye and are fluorescent.

The total amount of porphyrins in a urine sample is easily measured. This is a useful test for screening especially when combined with ALA and PBG. But an increase in urine porphyrins is nonspecific, and may not be an indication of an acute Porphyria if ALA and PBG are normal.

A variety of porphyrins are present in urine. When there is an increase, particularly a large increase, in total urine porphyrins, it is often useful to determine the individual porphyrins found in urine. It is seldom important to do this if the total in normal.

The most common method for separating the individual porphyrins is "high performance liquid chromatography" (HPLC). This method will measure amounts of porphyrins with 4 or more carboxyl groups found in urine (see Table 3). In interpreting HPLC results, it is most useful to see which porphyrins predominate rather than focus on the amounts of each porphyrin.

Table 3. Porphyrin names and the corresponding number of carboxyl groups

The body makes primarily the isomer III type of porphyrinogens, because only these are precursors of heme. But some isomer I porphyrinogens are made in small amounts and are excreted. HPLC detects the different isomers, which adds even greater complexity. The isomer I porphyrins predominate in urine (as well as erythrocytes, plasma and feces) in Congenital Erythropoietic Porphyria (CEP), because of the marked deficiency of the enzyme UROS.

Sodium carbonate (5 grams, added to a 24 hour urine bottle prior to collection) is widely recommended for urine specimens intended for measurement of PBG and porphyrins. It is widely recommended that acid be added to containers for collection of urine in which ALA is to be measured, because ALA is more stable in acid. This may be suitable if only ALA is to be measured as, for example, in screening for lead poisoning. Unfortunately, acid conditions enhance degradation of PBG, and it is seldom important to measure only ALA. Therefore, if Porphyria is suspected, sodium carbonate rather than an acid should be used, because it will be important to measure PBG and possibly porphyrins, as well as ALA, in the sample.

Total fecal porphyrins are markedly increased especially in active Hereditary Coproporphyria (HCP) and Variegate Porphyria (VP) and to a lesser extent in Porphyria Cutanea Tarda (PCT) and Erythropoietic Protoporphyria (EPP). Fecal porphyrins can be separated and measured individually by HPLC. Porphyrins with 2-4 carboxyl groups generally predominate in feces. These are excreted by the liver into the bile and then flow into the intestine.

As with urine, it is most useful to measure the total amount of porphyrins in a fecal sample. If this is increased, then the laboratory should determine by HPLC which porphyrins predominate rather than focus on the amount of each porphyrin. Fecal porphyrin determinations may be confounded by variations in fecal flow; most people have one or a few bowel movements daily and a "24 hour stool collection" is really not uniform from day to day. Substances in the diet and any internal bleeding into the stomach or intestines may also interfere.

Plasma (or serum) total porphyrins is a very useful and underutilized test when a Porphyria is suspected as a cause of photosensitivity.  Normally there are only trace amounts of porphyrins in plasma, and the amounts increase markedly in patients with cutaneous Porphyrias. Being both sensitive and specific, plasma porphyrin concentrations are increased in any patient with skin problems related to any type of Porphyria and are seldom increased in other conditions. 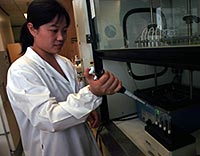 The preferred method, at least for screening, involves diluting plasma with a nonacid, neutral buffer and measuring the porphyrins directly by fluorescence scanning. This can serve not only as a rapid screening method for all cutaneous Porphyrias but can determine whether a patient has VP rather than PCT and other Porphyrias that can cause blistering skin lesions. This method also detects some cases of latent VP.

The excess porphyrins in plasma in VP are mostly covalently linked to plasma proteins and are readily detected by the method of fluorescence scanning but may not be detected by the HPLC methods. It needs to be kept in mind that the normal range for plasma porphyrins is higher in patients with end-stage renal disease. Moreover, hemolysis of a blood sample invalidates a plasma porphyrin determination, because normal erythrocytes contain much larger amounts of porphyrin (in the form of zinc protoporphyrin) than does normal plasma. When the total plasma porphyrin is increased, HPLC can be used to determine which porphyrins predominate. This is done less commonly than for urine.

Plasma porphyrin measurements may be less useful for detecting EPP than other cutaneous Porphyrias. One reason for this may be that protoporphyrin is very light sensitive, and the concentration in the sample can decrease rapidly if it is exposed to light during processing. Therefore, erythrocyte porphyrins should be measured if EPP is strongly suspected.

Assays for heme biosynthetic pathway enzymes in erythrocytes, especially ALAD, PBGD and UROD, have become widely available. These assays should not be used as first-line tests for Porphyria attacks when screening patients with symptoms. They are useful for family studies, when it is established that an index case has a particular enzyme deficiency. Difficulties with these assays in clinical practice include the following: (i) Ranges for a particular Porphyria and normal, non-Porphyric reference ranges may overlap. (ii) Some mutations may cause a particular enzyme to be deficient only in nonerythroid tissues. (iii) Falsely low values are common due to problems with collecting or transporting the sample. Some laboratories employ coupled enzyme assays that may lack specificity. If a patient is found to have a deficiency of more than one enzyme in erythrocytes, it is likely that the results are not reliable.

Specific mutations can be identified by DNA testing. This may be the ultimate means of confirming a diagnosis of Porphyria. Once a mutation is identified in a family, this is the most reliable means of detecting other carriers of the same Porphyria associated mutation.

Not every family with a given type of Porphyria has the same mutation. For example, more than 200 different mutations have been identified in the PBGD gene in different Acute Intermittent Porphyria (AIP) families. No single test for all of these DNA variations is available. Therefore, DNA testing is not suitable for screening for Porphyrias, except within families.

Furthermore, not all DNA variations cause the enzyme product to be impaired and lead to a disease. Therefore, a new mutation requires further research work in the laboratory to show that it impairs the enzyme product. For these reasons, DNA testing is most meaningful only after standard testing for Porphyria has confirmed a diagnosis.