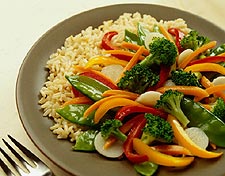 Most people have little knowledge about the nutrient content of foods and the normal requirements for specific nutrients. What follows is some general information on these matters. This is not intended to replace information and advice on individual nutritional needs, which are best provided by a physician or dietitian.

Included below are some of the standard dietary guidelines for healthy people. It should be evident that these do not differ very much from the dietary guidelines given above for patients with Porphyria. People chose foods - not nutrients - when shopping, preparing meals at home, or ordering meals in restaurants. Their choices are determined by factors such as ethnic background, culture, tradition, habits developed during childhood, income, education, occupation, marital status and age. Advertising of food products and recommendations by government agencies, health organizations, and health care providers also play an important role. Seasonal and regional availability and cost also influence choices. Agricultural policies, food regulations, and programs for feeding the poor are also important.

Foods are composed of varying amounts of the following:

Non-nutrient substances include dietary fibers, which may impair the absorption of some nutrients, but improve colonic function and are possibly protective for cancer and arteriosclerosis.

Other non-nutrient substances include phytate, oxalate and other chemicals that can bind calcium, iron, zinc and other minerals and reduce their absorption. The nutrient compositions of various foods have been determined by chemical analysis and other methods. These have been compiled, most notably, by the U.S. Department of Agriculture. These compositions are approximate and may vary considerably.

The "normal American diet" is highly variable among individuals and can also vary considerably in a given individual over time. Most Americans consume approximately 10-15 percent of total energy in the form of protein, 40-70 percent as carbohydrate, and 30-60 percent as fat.

The Recommended Daily Allowances (RDAs) provide a means of assessing the adequacy of intakes of nutrients. RDAs are the levels of intake of essential nutrients considered to meet the known nutrition needs of practically all healthy persons. (RDAs are established on the basis of available scientific knowledge by the Food and Nutrition Board of the National Academy of Sciences.)  An RDA is not as average requirement but rather is considerably above the average requirement. In statistical terms, an RDA is roughly two standard deviations above the estimated average requirement for healthy people. As a result, only a very few healthy people may require more than the RDA and most people will actually require less than the RDA. RDAs vary with age and sex, and are tabulated as such. There are no RDAs for calories, carbohydrate or total fat. RDAs are for healthy individuals. Nutrient requirements may be altered by disease.

The U.S. RDA for a nutrient is somewhat different. It is the legal standard established by the Food and Drug Administration and is used on many food labels. Its aim is to inform shoppers about nutritive values of foods. It is based on the RDA but is modified to provide a single value for the entire population in the U.S. four years of age or older. For most nutrients, the U.S. RDA is the same as or larger than the RDA.

Several widely-known dietary guidelines are described here. None of these is a complete dietary plan.

The "Basic Four" Plan. In 1956 the U.S. Department of Agriculture, in response to a need for simple and specific guidelines that Americans could use in planning diets that would meet the RDAs for essential nutrients, established four basic food groups. They recommended specific numbers of servings from each food group as part of a well-balanced diet.

The four food groups differ in nutrient content. Foods within a given group also differ and do not all provide equivalent amounts of the same nutrients. For example, some fruits and vegetables are particularly good sources of vitamin C, while others are especially rich in carotene, which is the precursor of vitamin A.

It is important to recognize that when adhering to the "Basic Four" plan there can be wide variation in nutrient intakes from day to day. This is particularly true for vitamins and other micronutrients. This plan recommends servings that should be part of a healthy diet. The plan itself is not a total diet. Eating only the recommended number of servings from the four basic food groups may not provide an adequate diet. Such a diet could be deficient in calories, vitamins A and E, riboflavin, niacin, folate, magnesium, iron and zinc, for example. Additional servings of foods within the plan and additional foods may need to be consumed to provide adequate amounts of all nutrients. The "Basic Four" plan remains a practical, noncontroversial and easily understood guideline that can serve as the basis of a healthful diet.

The National Research Council (NRC), which is the action arm of the National Academy of Sciences, issued two somewhat conflicting sets of dietary guidelines in 1980 and 1982. The two different advisory panels that prepared these guidelines were concerned about the broad issues of diet and health, including the prevention of cancer and arteriosclerosis.

A report in 1980 entitled "Toward Healthful Diets" concluded that no specific dietary recommendations were appropriate for the entire U.S. population. Rather, the report recommended the following advice on how to achieve a balanced selection of foods and a moderate and adequate consumption of nutrients. This advice is consistent with the Basic Four Plan.

A second report in 1982 entitled "Diet, Nutrition and Cancer" focused on the putative relationship between diet and cancer. Specific recommendations about certain foods were made.

The latter recommendations have been controversial. The report itself stated "The data are not sufficient to determine the contribution of diet to the overall cancer risk or the percent reduction in risk that might be achieved by dietary modification." The emphasis on cured and smoked meats was not appropriate, in the opinion of many. Few meat products in the U.S. are preserved by heavy smoking, salting or nitrate treatment. Liquid smoke flavorings are extensively used; these contain little if any benzo(a)pyrene, the principal carcinogen in smoke. Benzo(a)pyrene is one of the chemicals known as "polycyclic aromatic hydrocarbons" found in cigarette smoke and in charcoal broiled meats. These chemicals can stimulate the heme biosynthetic pathway in the liver and might be harmful in the acute Porphyrias. Meats are preserved primarily by refrigeration rather than salting, and the addition of nitrate is closely regulated. Curing solutions for bacon contain ascorbate (vitamin C) or erythorbate to prevent formation of nitrosamines. The capacity of bacon to produce nitrosamines during frying is routinely monitored by the FDA. Therefore, there is no evidence that cured or smoke meats routinely sold in U.S. supermarkets are hazardous. Similar recommendations with regard to consumption of fats, fruits and vegetables have been made by other organizations, including the American Heart Association, the American Cancer Society, and the Surgeon General. Some others feel that such recommendations should apply only to individuals or groups known to be at risk for diseases such as arteriosclerosis, hypertension, or cancer, rather than to the general population.

Some approaches useful in enhancing the motivation of individuals to change their diets are listed below. Approaches described here for encouraging dietary changes are very general and do not include more specific approaches that are useful, for example, for weight control. Similar strategies for altering health behavior are used to encourage individuals to make other changes that are favorable to their health (stopping smoking, for example).