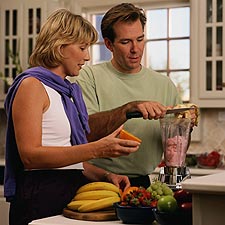 Sometimes patients with acute Porphyria have symptoms such as profound weight loss, recurrent vomiting, and eating attitudes that suggest "eating disorders" such as anorexia nervosa or bulimia. Usually these symptoms are due to Porphyria itself and do not represent a primary eating disorder. However, mild forms of eating disorders are common, especially in young women, and are difficult to recognize. Mild forms of eating disorders may have few consequences in healthy individuals. However, the effects can be profound when combined with a medical condition that is sensitive to changes in diet. For this reason, the study of eating behaviors has become important in a number of diseases such as diabetes, cystic fibrosis and inflammatory diseases of the intestine. There have been few studies so far in Porphyria.

Eating behavior is assessed not only by determining the dietary intake of a subject, but also by assessing eating attitudes and habits. This is done with questionnaires that are different from those used to assess dietary intake alone. It is likely that these assessments will become increasingly useful for the management of Porphyria in the future. For the present, physicians familiar with eating disorders and dietitians may be most likely to recognize abnormal eating attitudes and behaviors that may contribute to attacks of Porphyria.