The Glucose Effect in Acute Porphyrias 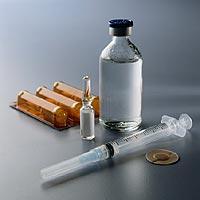 The disorders Acute Intermittent Porphyria (AIP), Hereditary Coproporphyria (HCP), Variegate Porphyria (VP) and ALAD Porphyria (ADP) are treated initially with the administration of carbohydrate/glucose. This therapy has its basis in the ability of glucose to decrease porphyrin biosynthesis in the liver.

Glucose can diminish excess excretion of heme precursors, which, in turn, can prevent an attack or can hasten recovery from an attack of the acute porphyrias. Therefore, it is suggested that when patients cannot consume carbohydrates due to nausea or vomiting, glucose should be administered intravenously. Some physicians have prepared a standing order for patients who are prone to attacks to help facilitate intravenous glucose in the emergency room. Often this prevents further hospitalization.

Most patients are knowledgeable about the deleterious affect the wrong drug can have on their bodies and are consequently careful about the medication they ingest, but some do not understand the importance of carbohydrates for prevention and treatment of a Porphyria attack.

Because it is a simple therapy, many patients ignore the significance of their carbohydrate (sugar) intake to suppress disease activity. When the Atkins Diet, which was a high protein/low carbohydrate diet, became popular a number of years ago, many Porphyria patients who adhered to this diet became ill. It soon became apparent that their severely reduced daily carbohydrate count exacerbated their Porphyria. In fact, complying with the Atkins plan precipitated attacks in some previously undiagnosed and non-symptomatic individuals.