Panhematin® from Recordati Rare Diseases in Lebanon New Jersey, is a lyophilized form of alkaline heme that has to be reconstituted immediately prior to administration. Panhematin® should be infused into a large peripheral vein. A large central line or port may be used, if available. 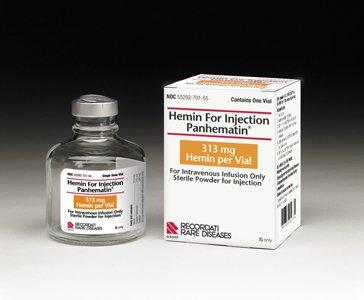 Doctors administer Panhematin® to correct heme deficiency in the liver and repress production of porphyrin precursors. Panhematin® almost always normalizes porphyrin and porphyrin precursor values. Three to four mg/kg of Panhematin® given once daily for four days early in an attack produces a highly beneficial effect in most patients. Commonly noted are decreases in pulse rate, blood pressure, abdominal pain, as well as decreased levels of urinary porphobilinogen (PBG). These effects can occur within a day.

The new dosage strength is being launched to better accommodate the current weight of patients and the current dosing of Panhematin in clinical practice.

A new copay assistance program for Panhematin will be available starting in July 2017. This program can help eligible patients with their copay when they receive Panhematin on an outpatient basis. Please see the Panhematin website (www.panhematin.com) for more information.

Watch this video to learn about using Panhematin® to treat Acute Porphyria.

Panhematin® is the only commercially available heme therapy in the United States. (Heme arginate is another preparation, but is only available outside of the U.S.) While a high carbohydrate diet is recommended for patients with Porphyria, it is not regarded as highly effective by itself. Intravenous glucose therapy is a treatment option for mild attacks. When heme therapy was introduced as a treatment, it was recommended that it be initiated only after several days of glucose therapy was unsuccessful.

Today, physicians experienced in treating patients with attacks of Porphyria recommend early use of Panhematin® rather than waiting to see if glucose alone will be of decisive help. However, not every patient who experiences an attack of Porphyria needs Panhematin® since mild attacks may well respond to glucose alone. But a specialist's advice and consultation may first be obtained. This is recommended also for prophylactic infusions of Panhematin® given to prevent attacks.

Many experts recommend reconstituting Panhematin® with albumin as this makes it more stable. This helps prevent phlebitis and an anticoagulant effect. Like Panhematin®, albumin is a biologic product, which is approved and regulated by the FDA.

During treatment, attention should be given to salt and water balance. Harmful drugs should be stopped. These include barbiturates, sulfonamide antibiotics, and many others.

For medical information questions (for healthcare professionals only) regarding Panhematin®, please call 1-888-575-8344.  For safety or adverse event related questions, please call 1-888-575-8344.  If your physician would like to speak to a Porphyria expert who has expertise in using Panhematin®, the American Porphyria Foundation (APF) will gladly provide that information.  Call us at 301-347-7166.

Read Member Stories that include experiences with Panhematin®:

The Earlier the Better 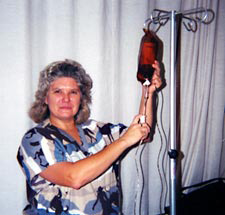 Although there have been no controlled studies, the results since the first report in 1971 are impressive enough to advocate the early use of Panhematin® for Porphyria attacks. When Panhematin® is given late in an attack, less benefit may occur.

Although it is generally agreed that the outlook for patients with Porphyria has improved, an attack can still be life threatening. Respiratory insufficiency may require use of an artificial respirator. Therefore, Porphyria attacks should be treated as early and effectively as possible. Fortunately, in patients with known Porphyria, many attacks can be prevented. However, some patients may have an occasional attack even if they are careful in their lifestyles. And although prophylactic use of Panhematin® to prevent attacks has not been formally studied, Panhematin® is widely used in this manner for patients known to have acute Porphyria and attacks that recur frequently.

Although Panhematin® has few side effects, it does act as a mild anticoagulant. Thus, concurrent use of other anticoagulants such as heparin or Coumadin® (warfarin) should be avoided. Panhematin® may also produce superficial thrombophlebitis, especially if infused into a small vein. Panhematin® is less likely to produce phlebitis if it is mixed with human albumin before it is given. Before Panhematin® is used, it should be clear that the patient indeed suffers from one of the acute Porphyrias (Acute Intermittent Porphyria (AIP), Hereditary Coproporphyria (HCP), Variegate Porphyria (VP), or ALAD Deficient Porphyria (ADP)) and that the patient's symptoms are due to an acute attack. Panhematin® therapy may not be indicated unless the diagnosis of acute Porphyria is proven by a marked increase in urine PBG.

How to order Panhematin in the U.S.

Customers can order through their primary wholesaler or via ASD Healthcare.
Shipments will be delivered in a shipping box from ASD Healthcare via UPS Next Day Delivery and may be expedited for an additional cost.

Other Important Treatment Considerations for the Acute Porphyrias

What if I can't call during the day?

If you are unable to contact us during our regular hours (M - F between 9 am and 5 pm eastern time), simply leave a message with your name, a phone number where you can be reached, and your question.  A reimbursement professional will return your phone call within one business day.

For other Panhematin® related questions:

Dial 911 if you are experiencing a medical emergency.

Panhematin® (hemin for injection) can be ordered through a primary wholesaler or by calling
800-746-6273 or email asd.customerservice@asdhealthcare.com